A 35-year-old man married his fiancée’s corpse at her funeral to fulfil the breast cancer victim’s dying wish.

The 34-year-old reportedly died from breast cancer on 14 October after battling the disease for five years.

On 6 October, the young woman slipped into a coma.

“She no longer recognised me, and in the end, we didn’t get a chance to say farewell,” a devastated Xu said.

A touching montage of the couple’s 12 years together was displayed on a screen as Xu made his vows and married the love of his life in her open casket surrounded by roses.

“I know I promised you I wouldn’t cry, but sorry, I couldn’t do it,” he said during the ceremony.

The young couple met at university and fell in love in August 2007. They planned to get married in 2013 but they put the ceremony on hold when Yang felt pain in her right breast. She was later diagnosed with breast cancer. 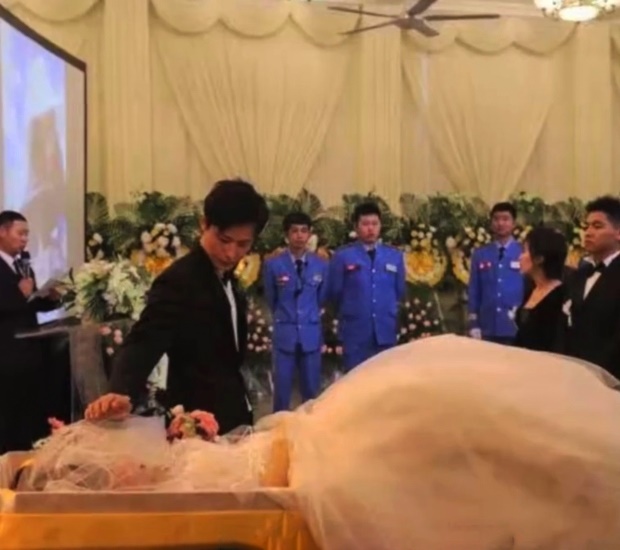 Yang, who was 28 at the time of her diagnosis, was told she only had five years to live.

Over the next few years, she continued to undergo targeted treatment, including chemotherapy and radiotherapy, and she documented her experiences on the Chinese social network Weibo as support for other cancer sufferers.

The Chinese broadcaster CCTV wanted to interview the “star patient”, as doctors referred to her, but she declined the offer because she didn’t want to appear on TV in that state.

At one point, it appeared as though Yang was beating the illness and the couple began planning their wedding again. But the bride-to-be’s cancer returned and quickly spread to other parts of her body.

According to reports, Xu remained by his fiancée’s side 24 hours a day for one week after her death.

“All I can do is to fulfil your wish, and letting you wear this wedding dress fulfils my wish,” Xu said.

Read more on:
deathmarriage
LATEST YOU