This week Guy About Town introduces his friend Metro Man. Be warned, Metro Man is sometimes merciless when it comes to fashion. Metro Man reminds Guy About Town of his beloved Aunt Miems of the West Coast. Aunt Miems was a formidable woman who could bake anything from a meringue to a wedding cake. She was equally skilled with a sewing machine and a plough, which she often used in the potato lands of Redelinghuys.

A little more on Metroman

He was born shortly before the 1970s in the previous century and wrote his matric at Prieska. Even before he could spell he knew cloth, lace and feathers were his future.  He sauntered down to the city, where he obtained a degree in street fashion. He also played the organ at funerals and weddings and sometimes performed as a backing singer for well-known artists. In those days, before he took the fashion world by storm, he made a living selling quilts and tea cosies at markets. He made his name when he made a transparent dress from plastic for a first princess in the Miss South Africa Competition.

Metroman says it’s pointless photographing only perfectly dressed men. He feels one should sometimes also show how it’s not done.

So how should it not be done?

This week Guy About Town and Metro Man looked at a few less successful outfits that caught their eye. Pay attention to Metro Man’s advice, he’s spot on . . . Well, mostly.

Each of the young men here was willing to appear in Guy About Town’s blog for a little advice but we decided to blur their faces as Metro Man displayed that merciless streak we mentioned. The last time yours truly saw so much denim was when he visited his oddball friends who live in a coastal town. Their large bodies were poured into it and their lounge suite was covered in it. Even the scatter cushions and curtains were made of denim. Fortunately, or unfortunately, the curtain tie was cut from an old national flag.

Metro Man says this attractive young man could look good in any outfit. So drop the denim jacket, put on a simple T-shirt or combine a fresh button-up shirt with fitted denim pants. Sunglasses in a shopping centre should only be rounded off with a white stick and a Labrador. Metro Man is irritated by stylish men who wear sunglasses indoors. Emphasise your best assets! Eyes tell women exactly what they want to know about you. This Superman should stop flying and put on his running shoes. There’s nothing wrong with a curve or two, but to pour oneself into an outfit that interferes with your circulation is wrong. Wear something that fits well. Something too tight may just be dangerous.

A tip that works: Talk to yourself while dressing tomorrow morning. If you sound like Alvin and the Chipmunks as soon as you’ve put your pants on, wear something else. If it feels as if your shirt is giving you a heart attack just think of the people who’ll have one when they see you in it. No man wants to look like a polony with a fancy label. 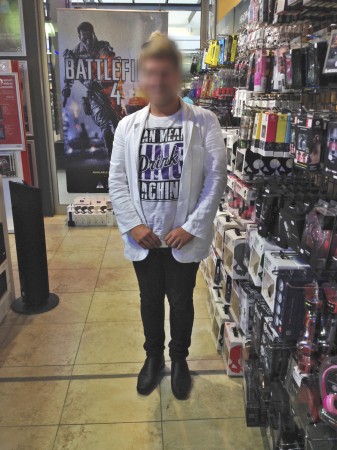 Not even brides marry in so much white these days.

This photograph was taken in George in the southern Cape, and the first thing that came to mind was “The Madness of King George”. My grey old mother always said, “If you have nothing good to say, keep quiet.” But as a fashion philanthropist yours truly feels it’s his duty to help this young man out of the fashion spectacle he’s become. Please note: white jackets were big news in the movie Saturday Night Fever and by my reckoning it’s more than 30 years later.

If you want to wear a jacket, check out Guy About Town’s entry on jackets. Remember, dark jackets are always a style winner – day and night.

Make sure your T-shirt fits comfortably. And stand up straight! Good posture and self-confidence rounds off an outfit. At the moment you look like a poodle wearing a jersey bought at the old-age home’s bazaar. Pull your shoulders back and look women in the eye.

Guy about Town and his mate Metro Man blog for YOU about fashion ideas for men who want to look good and fashionable without spending the price of a mansion or look like a strutting peacock. Join in their discussions onTwitter  and Facebook.