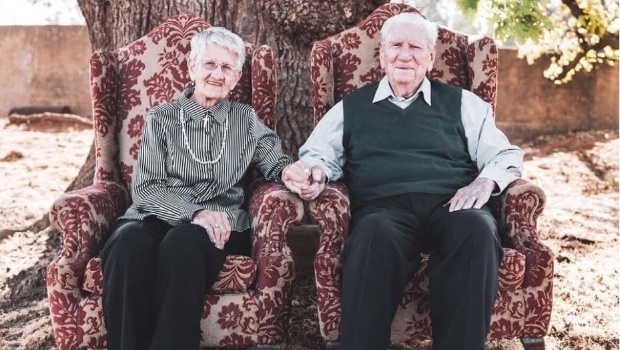 Everyone knows marriage can be a tricky business. But not only have Pieter Griessel and his wife, Saida, managed to stay married for 70 years, they’re still very much in love too.

In seven decades 97-year-old Pieter’s wife, Saida (93), has never made him sleep on the couch.

“No, I’ve never been in real trouble,” he chuckles.

“I swopped our king-size bed for a queen-size one – then there’s less space and more opportunities for spooning.”

Pieter and Saida were introduced to each other in 1949 by Saida’s cousin Hettie Axelson.

“My cousin told me there’s someone in her church in Vanderbijlpark she wants to introduce me to.”

Pieter was a young pastor in the congregation and met Saida there.

“Truthfully, I orchestrated everything,” he says. “I’d seen her and wanted to get to know her better. I was amazed by her beautiful hands and hair, though it was twisted into a bun.”

The evening they met, the two talked until 2am – and the rest is history. “Three months later we got engaged and three months after that, we got married – on 11 March 1950.”

Saida says she couldn’t have wished for a better husband.

“He loves the Lord and reads his Bible every evening. We have God to thank for sending us to each other,” she says.

Pieter says Saida’s love and care have made him a rich man. “She spoils me and cooks the most delicious food. In the 70 years we’ve been together, there’s been nothing but love and care.”

The couple live in a retirement village between Magaliesburg and Krugersdorp, Gauteng.

Their grandchildren are planning a big party for the anniversary.

“We’re leaving it all in their hands – we have no idea what they’re planning,” Pieter says.

Read more on:
lovegautengmarriage
LATEST YOU