Guest brings llama to wedding – and the bride is not happy! 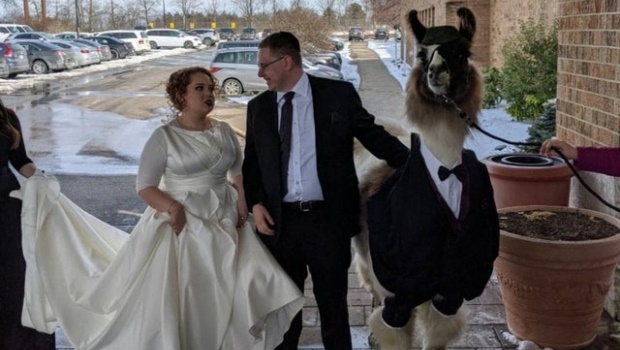 American college student Mendl Weinstock (21) proved to be quite the guest from hell when he arrived at his sister’s wedding with a llama as his date, CNN reports.

Much to the dismay of the bride, Riva, the animal was a hit with guests, who wanted photos with it.

After sharing the image on Reddit, it quickly racked up thousands of comments as people shared their views.

Turns out Mendl’s unusual choice of partner started from a family joke years ago when he and his sister were driving from their home in Ohio to Indiana with some friends.

“She was talking about her wedding, planning it, making plans almost as if it were going to happen the next day even though she wasn’t dating anybody at the time,” Mendl told CNN.

The nonstop talk between the three teenage girls got on his nerves, and he blurted out an ultimatum. “I said, ‘If you make me come to this wedding, I’m going to bring a llama with me. It was just the first thing that popped into my head.”

Naturally, Riva got upset and said he was going to ruin her special day, but accepted it, thinking it would never actually happen.

Fast forward to 2019 and Riva got engaged in October. After calling her brother to share the happy news, she received a text that his llama was already rented.

“When my brother puts his mind to something, he gets it done. So at some point I had to accept it and decide it was easier to get in on the joke than to fight it,” she says.

He forked out $400 (R6 400) to rent the animal, which came from a llama farm, but adds it was all worth it. “It was worth it just to see her reaction, but it’s been more worth it now that I’ve got all this internet fame,” he says.

The llama, named Shockey, wore a custom-made tuxedo and stayed outside the wedding hall for about 30 minutes, taking pictures with guests, who unbeknown to Riva were in on the joke. In fact one of her friends placed two inflatable llamas at her table inside.

Riva vows she’ll get her revenge, saying Mendl’s college graduation is around the corner. . .

“He should sleep with one eye open.”