Three years ago today, the world waited with baited breath for the Duchess of Cambridge for emerge from the Lindo Wing of St Mary's Hospital in London. Now Prince George has left the terrible twos behind him, and embarking on his next life phase as - wait for it - a THREE-nager! But even with the toddler tantrum phase behind them, it's not going to be smooth sailing ahead for Wills and Kate. "By their nature threenagers understand more, and so want more, immediately," mommy blogger and journalist Anna Tyzack writes for UK publication The Telegraph.

"For his parents, the next few months will be all about managing George’s expectations. If George asks for his sandwich in triangles, they better not cut it into squares."

On top of that all, the duke and duchess can expect some difficult questions, she continues.

"Is heaven real? Why is daddy’s hair falling out? At his birthday party today the Duke and Duchess should expect at least a couple of meltdowns. Threenagers are at their most hideous when given the limelight."

While his doting dad has previously admitted his mini-me is a cheeky little chap -- "a little bit of a rascal" -- there's no denying he's one of the cutest tiny blue-bloods in the world.

Here are our favourite Prince George moments in his three whirlwind years...

Welcome to the world! The life of a royal is tough! Newborn George made his first public appearance when he was just hours old, cradled in his mamma's arms atop the steps of the Lindo Wing in London.

I love my mum! 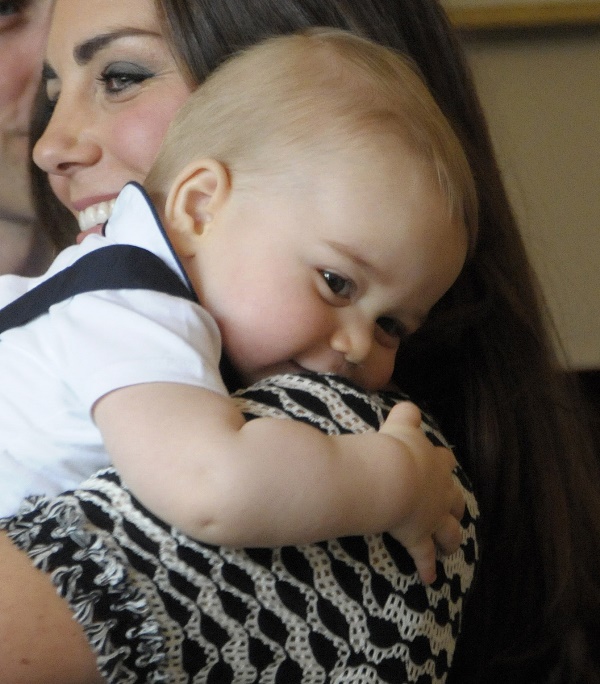 On his first royal tour with mom and dad, all the way Down Under, nine-month-old George showed how much he adored his mom on a special playdate in Wellington, New Zealand. 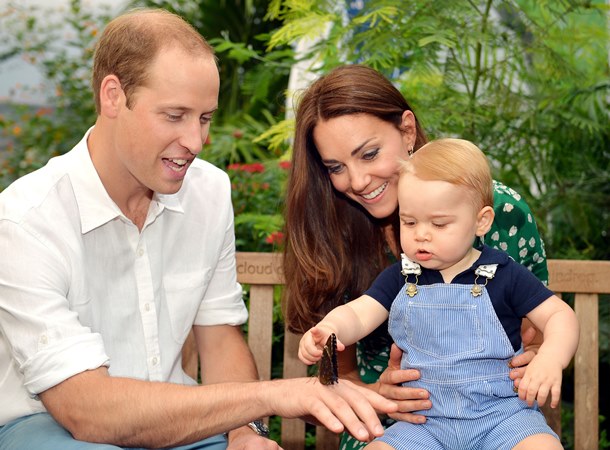 On his first birthday, William and Kate treated their tot to a visit to the Sensational Butterflies exhibition at the Natural History Museum in London.

Only child no more An only child no more. Little George donned a miniature version of his dad's blue ensemble to meet his new playmate for the very first time. Prince George held his little sister Princess Charlotte like she was the most precious thing in the world when the two sat for their first official portrait together -- taken by keen photographer mom Kate, of course.

He had flashbulbs in his face from day one, so it's a good thing George is not camera shy. In fact, the little chap seems to relish in all of the attention -- as this adorable snap released in honour of his 2nd birthday proves.

He's a country boy through and through! George started school up the road (or path) from his family's home at Anmer Hall in Norfolk at Westacre Montessori School. Read more: George is adjusting ‘very well’ to nursery school – and he knows what he wants to be when he grows up!

Nice to meet you, Mr President!

The third-in-line to the throne received US leader Barrack Obama and his wife Michelle at his leisure in the royal apartments of Kensington Palace. In a fluffy white dressing gown!

Prince George thanks @BarackObama for his rocking horse, given to him when he was born

Read more: Prince George stayed up way past his bedtime to meet the Obamas

Prince George took pride of place in Queen Elizabeth’s official 90th birthday photo, taken in the White Drawing Room at Buckingham Palace, was taken to feature in a series of stamps to commemorate the monarch’s milestone birthday on 21 April.

Read more: ‘He was as good as gold’: adorable Prince George takes centre stage in the Queen’s 90th birthday photo It runs in the family. Clearly Georgie is as obsessed with flying machines as his dad and Uncle Harry, as his first official royal engagement at The Royal International Air Tattoo at RAF Fairford in Gloucestershire recently proved. Toddler no more! Prince George is a strapping young lad in the photos released by Kensignton Palace today in honour of his third birthday today. The photos were taken at Anmer Hall in mid-July. The photographer who took the snaps, Matt Porteous, said, "I really enjoyed the opportunity to take these photographs of Prince George. It was a very relaxed and enjoyable atmosphere. I'm honoured that they have decided to share these images with the public to mark his third birthday."

You may also like: This video of the Queen telling Prince William off is absolutely delightful

For more on the Prince's life so far, get the latest issue of YOU, out now! Get a digital copy here