Woohoo! We're heading back to the Hamptons at the end of the month to find out what other dastardly deeds Emily and her friends and foes are going to dream up in season three of the drama Revenge. Season two wasn't great; it just started getting muddled but I hung in there because I was so drawn into this world of the rich and the vengeful. I've checked what others are saying on Twitter and the general feeling is season three is a vast improvement. So I'm definitely going to watch. Ag, what am I saying, I was always going to be tuning in. Revenge is back on Thursday 28 November. I've listed some other shows back in November and December at the end of this blog, including new seasons of Modern Family and Grey’s (which starts tonight) but it’s four new series I want to look at this week, especially the one I've been looking forward to for ages: Marvel’s Agents of S.H.I.E.L.D.

Four new shows to look out for Woot! It’s finally here; it’s the show I've been waiting ages for. I married a superhero geek and it rubs off even when I'm pretending to listen to the latest developments in the comic book world. So I've watched all the superhero movies, loved The Avengers and am fond of  the always-suited-up Agent Phil Coulson. I really hated the fact they killed him off in the movie so it’s a relief to see he's been resurrected and given his own TV series. Why is he alive again? Well, that's one of the mysteries to be solved by the series. All we know is he went to “Tahiti and it’s a magical place”. The TV series takes place in the same universe as the movies (in fact there’s an episode later in the series where the team has to handle a problem connected to the new Thor: The Dark World movie that premiered in SA cinemas last week) so The Avengers have saved the world and now Coulson has his own S.H.I.E.L.D team which works out of a luxury aeroplane and travels around investigating strange events. In his team he has the chisel-jawed tough agent Grant; the mysterious reluctant agent and pilot Melinda; the quirky, young smart kids, engineer Leo and biochemist Jemma; and they add computer hacker and non-S.H.I.E.L.D member Skye to the gang in the first episode. It’s so good to have a series by Joss Whedon, who gave us Buffy, Angel and Firefly, back on TV again! This is a spin-off of the series Pretty Little Liars and follows bad-boy Caleb Rivers (Tyler Blackburn), boyfriend of Hanna, one of the liars, when he leaves their town of Rosewood to help a girl, Miranda, who goes to Ravenswood to find her uncle. They both find tombstones with their pictures and names on it and become involved in the town’s deadly curse that affects five teenagers. I saw lots of comments about how creeped out people were by the first episode and that it's far darker than its mother show.

Monday 2 December on Vuzu at  7 pm

This one is a comedy about an immature police detective who has to change when a strict new boss refuses to put up with his childish ways, even if he does get results. Andy Samberg of Saturday Night Live plays Jake Peralta, the childish cop and Andre Braugher, recently on TV in Last Resort, is the tough new boss.

It’s made by the people who created the incredibly funny Parks and Recreation so I have high hopes. But it could also end up being over-the-top and silly. I did, however, giggle during the trailer when Jake and his partner hand a possible witness a picture of a potential suspect, asking if he recognises the person, and he thanks them and keeps the picture.

Tuesday10 December on Vuzu at 7 pm I like the sound of Trophy Wife; it sounds fun and has a strong cast. I intend checking out the first episode to see if it goes on my "not to be missed" list. Malin Ackerman (yet another movie actress venturing over to TV, where all the cool kids are hanging out) is Kate the former party girl, now trophy wife of the title. She marries Pete (The West Wing’s Bradley Whitford), who may be the man of her dreams but he comes with two ex-wives and three kids, and they need to make it work. The trailer reminded me a little of Modern Family actually. The straight-laced doctor ex is played by Oscar-winning Marcia Gay Harden (the other ex is the kooky hippie one). But is it funny? Well, the first episode involves the trophy wife trying to win over the teen daughter by taking the blame for the alcohol she takes to school. She ends up drinking it and getting drunk and ex-wife No 1 has to take her home. Has to be funny, right? Watch the trailer here. 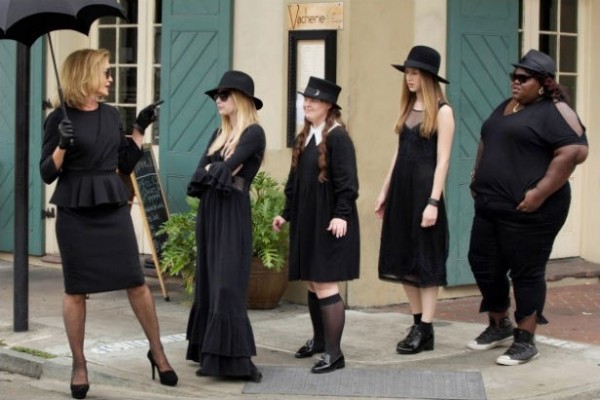 Arrow season 2 on Friday 13 December at 7.30 pm on M-Net (note it starts with a recap episode)