In the Stellenbosch magistrate’s court on 23 September, Magistrate Greg Jacobs ruled Jason Rohde would be allowed to return home – back to a house which is adorned with so many of his wife’s loving touches. The wife whom he now stands accused of murdering. The front door stands ajar, allowing a glimpse of the entrance hall which is bathed in warm, welcoming lamplight.

An inspirational quote written on a heart-shaped blackboard and pots with small shrubs and purple pansies lend a cheerful finishing touch. But not everything in the luxurious mansion in Bryanston, Johannesburg, where Susan and Jason Rohde lived was as picture-perfect as the virtual tour on the Lew Geffen Sotheby’s website leads one to imagine.

“It’s all really tragic,” says one of Susan’s friends, who asked not to be named. “I saw her a few days before she died and she was looking so thin. She really looked stressed. I don’t think it was a happy situation. Neighbours heard fighting all the time.”

Looking at the pictures on the Sotheby’s website, it’s evident Susan (47) poured her heart and soul into creating a light and loving family home.

But this illusion was shattered on 24 July when she was found hanging behind a bathroom door in the hotel on the Spier wine estate outside Stellenbosch.

Initially it was thought to be suicide but after a postmortem revealed evidence that someone may have strangled her with their bare hands, Jason (47), the CEO of Geffen International Realty Franchises (a division of Sotheby’s), was arrested at their Bryanston home and charged with murder.

The last time the couple had been seen together was at the Sotheby’s annual conference held at Spier – where they were reportedly overheard having a blazing argument about an affair that Jason had allegedly been having with an attractive estate agent, Jolene Alterskye. He was released on R100 000 bail pending his next court appearance, on condition he stayed with his sister, Tori Coughlan, and her husband, Paul, on their smallholding in Morning Star, close to Melkbosstrand outside Cape Town.

They are “very kind, friendly people”, a neighbour tells us. The lawn is thick and green and the house is hidden behind large trees and bushes on the property where beautiful, well-fed horses roam. Although Tori declined our request for an interview she told us she believes in her brother’s innocence and is standing by him and his family as they try to get through this difficult time.

In a letter which was attached to Jason’s police statement Ester Kruger of the Lew Geffen Sotheby’s branch in Bryanston confirms the Rohdes’ home has been on the market since May. It was initially put on sale for R10,3 million.

The Rohdes had had two offers of R8,5 million each but declined both. Although a Sotheby’s agent told us the property had been withdrawn from the market following Jason’s arrest it was still being advertised on the website at a discounted price of R9,8 million.

The advertisement takes you on a virtual tour of the residence, offering a poignant glimpse into the Rohdes’ lives and the special little touches Susan added to make their lavish mansion feel like home. The “English-style” home has an open-plan kitchen and television room leading out onto a large patio, groomed garden and sparkling swimming pool. The house seems to have been designed to entertain and features a built-in braai, cocktail bar and beautiful patio furniture. 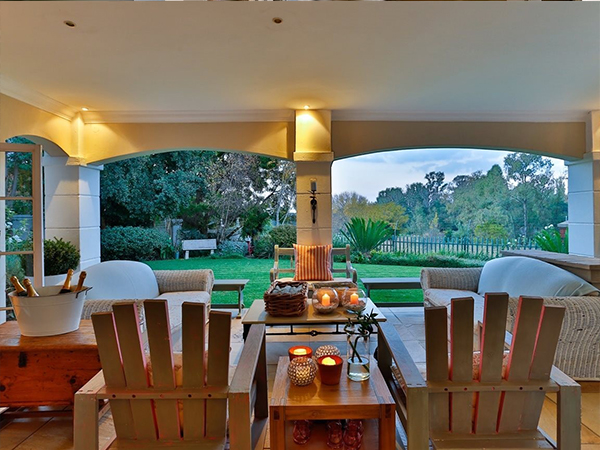 Back in May, Susan posted a picture on Facebook showing a bottle of red wine which she and Jason shared as they sat in their garden enjoying the idyllic view of the dam of the neighbouring Bryanston Country Club. In the pictures on the Sotheby’s website candles, small pot plants, floral pillows and framed family pictures give the patio a homely feel. On a shelf white letters spell out the words “House”, “Love”, “Peace”.

Bottles of sparkling wine rest in a large ice bucket – a marketing ploy to make the property seem even more desirable. Inside, a spiral staircase leads to the top floor. In one of the bedrooms a blackboard is covered in messages of love. In another, the words “Laugh”, “Friends” and “Love” grace the wall above the bed. Security is a priority in the house, says the description on the website. Besides the fact the home is in a security complex with a gate that’s manned around the clock, there’s also an alarm system and security beams around the house.

The colours throughout the house are soft pastels with occasional bursts of pink – which was apparently Susan’s favourite colour. She also favoured floral patterns when selecting cushions and blinds. A former teacher, Susan had a passion for interior decorating, says Deborah van Dongen, director of the charity organisation Hearts of Hope where Susan had often helped out.

“At a birthday event she would help to paint. She loved decorating and when we were configuring rooms she helped us lay everything out. She was very good at the creative side of things,” Deborah says.

Susan was always thorough and very reliable, she adds. “We miss her desperately. She leaves an incredible legacy.”

"Nothing ever goes away until it teaches us what we need to know,” declares a quote on a blackboard above a fireplace in one of the rooms in the Bryanston house. Was it Susan who wrote this? If so, what was she referring to?

What was really going on in her life behind the meticulously styled facade? Police are keen to know more. News website Netwerk24 recently reported that an independent forensic pathologist found evidence of bruising on Susan’s body.

Apparently she also had broken ribs. In addition to his bail of R100 000, Jason has been instructed to provide R1 million surety in the form of a bank guarantee by 14 September.

5 questions you might have about the Rohde case, answered

‘He was heartbroken’: Jason Rohde’s cellmate tells what the Sotheby’s boss’ first night in prison was like