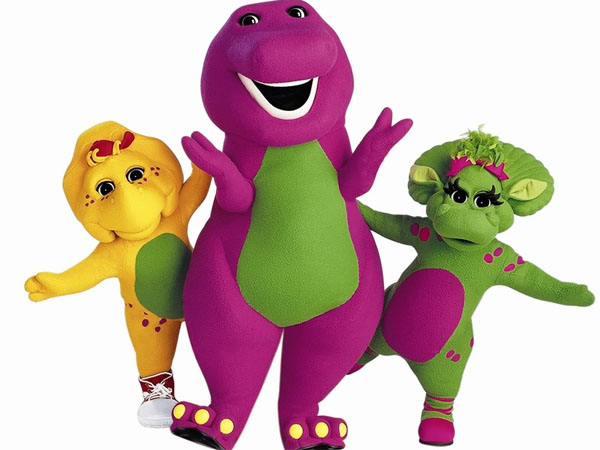 Am I the only one . . . who is desperately trying to get a toddler to watch TV shows that do not include a purple dinosaur?

I don't really have anything against poor Barney but toddlers love to watch shows over and over and there's only so much I can take. I know, I know the show teaches kids about getting along, being nice, being friendly, which are good, solid values to teach kids but I just cannot face hearing Barney's grating voice, that horrid snorting laugh he makes or any of those songs that stick in your head.

And toddlers are addicted to it, it's almost magical how our toddler will sit there transfixed, a child who cannot even stand still to have her hair brushed.

But I've had enough. So every time she asks for Barney, we suggest a different show which we can also tolerate. So far we have winners with Peppa Pig and Charlie and Lola and hopefully that list will grow soon. These are shows that are adorable and have humour that adults can appreciate.

Peppa Pig is fascinating, she's a five-year-old girl pig with a little brother named George and parents called Mummy Pig and Daddy Pig and they all love jumping in muddy puddles.

I love that the women are smart, strong and in charge - Miss Rabbit is the town's firefighter, helicopter pilot and bus driver and more, I lose count (not sure when she sleeps with so many jobs), while Mummy Pig has some sort of important job I can't quite make out and Mrs Zebra has a successful pottery studio (yes, I have watched many, many episodes of the show to know the details).

They pack a lot into five-minute episodes and the toddler can watch a few without getting over-excited. But the show often makes me overthink things in a rather worrying way.

Why are the animals all the same size, it bothers me that Pedro Pony is the same height as Peppa and her friend Suzy Sheep. He should be bigger right? Why does Danny Dog never try to eat Rebecca Rabbit?

I don't have answers to those questions but I did eventually google to find out why they all live at the top of hills as it was bugging me so much. Found an answer on The Financial Times of all places, where one of the creators Mark Baker explains, "When a child draws their house . . . the child will usually draw it by itself. Having a huge hill like that is so funny.

And ridiculous - that every time Peppa and George run out to play, they have to run down this very, very steep hill. It is optimistic, and fun." I like that they have thought about this. The FT article, by the way "How Peppa Pig Brought Home the Bacon", is on how the show became worth hundreds of millions of pounds.

The other show, Charlie and Lola, is about a sweet brother and sister who also learn all sorts of things without being too annoying and I love the titles of the episodes based on whatever is bugging Lola - I will not ever NEVER eat a tomato, I Am Too Absolutely Small for School, I Am Not Sleepy and I Will Not Go to Bed  (yup, there's a theme of stubbornness coming through) Though it does bug me that there's no parental supervision going on in their home as poor Charlie seems solely responsible for his little sister.

We do still have to give in and let Barney into the house every now and then but he's definitely not allowed in as often as before.

- Peppa Pig is on e.tv on weekdays at 2.30 pm and repeated on Saturday mornings

- Charlie and Lola is on CBeebies daily at 5.50 pm Peppa Pig and her family jumping in muddy puddles