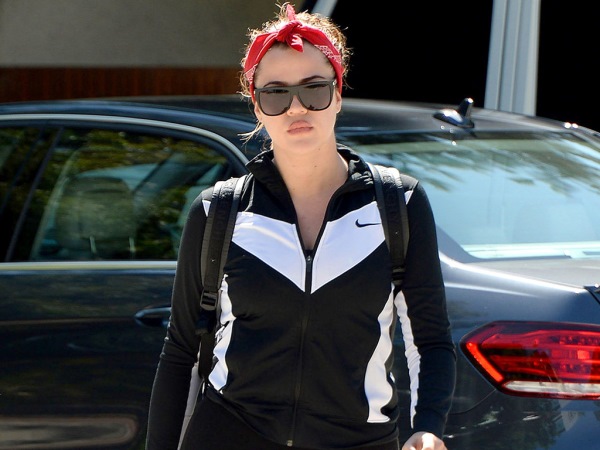 Khloé Kardashian is apparently not "stupid" enough to think her sister Kim wouldn't embarrass her on Twitter. The younger sibling is known for posting inspirational messages on Twitter and Instagram, and Kim (33) raised a few eyebrows when she tweeted that people who share quotes online have "major issues" earlier this month.

People who post lots of quotes have major issues lol. I can't take all the quotes in my feed. Twitter is ok but IG is for pics! — Kim Kardashian West (@KimKardashian) October 6, 2014

She was quick to assure followers she wasn't referring to 30-year-old Khloé. "I would never throw shade to my sissy on Twitter (sic)," she claimed.

I would never throw shade to my sissy on Twitter — Kim Kardashian West (@KimKardashian) October 6, 2014

However, it seems Khloé isn't sure the explanation was sincere. "Khloé's not stupid. She believes that Kim was aiming comments about Instagram posts at her, because they've spoken about it before," a source told British magazine Star. Kim added on Twitter that her sister doesn't "overdo" it and that she was just speaking about people in "general".

I'm not throwing shade at my sister's quotes. She doesn't over do it. Just speaking in general of people who post too many quotes — Kim Kardashian West (@KimKardashian) October 6, 2014

The Kardashian's family life is portrayed via their reality TV show and there is constant speculation of rivalry between the sisters, including older sibling Kourtney and half-sisters Kendall and Kylie.

It's thought Kim is particularly envious of 18-year-old Kendall's high-flying modelling career, with the gorgeous teen walking in countless shows during the recent Fashion Weeks.

There had been gossip earlier this year that Kim is also wary of Khloé outshining her, as the younger star has amassed a fan following.

"Kim is used to being the Kardashian sister everyone knows and adores, so she's feeling like Khloé is dethroning her," a source claimed.