The words were music to her ears: “I can finally hug my mom again”. That’s what Camilla Neese’s 12-year-old son Fawaz said to her after her life-changing bilateral mastectomy was performed in September last year.

We’re catching up with Camilla who is slowly recovering from her mammoth operation.

“They took about 10 kilograms off. The feeling is indescribable. I went from a [size] 5XL T-shirt to a 2XL T-shirt. I don’t have to carry all that weight and cope with all that the pain.”

We first spoke to Camilla 18 months back when she described her agony at being diagnosed with gigantomastia, a rare condition that caused her breasts to rapidly grow and resulted in her being bed-bound and in agony (YOU, 8 November 2018). Her breasts weight 14kg and kept on growing but her medical aid refused to pay for surgery.

The former model and dancer then told us that she had been diagnosed with cancer in August (YOU, 5 September 2019). But instead of being filled with fear she rejoiced because the diagnosis meant she finally got the green light for the surgery she so desperately needed.

Last September, Camilla had a bilateral mastectomy at Lenmed hospital in Kimberley. Although the 37-year-old still suffers from unbearable pains, she still celebrates the weight having been lifted off her chest.

“Cancer saved my life. Because only when I contracted cancer was the medical aid willing to pay for the surgery,” she says. Camilla Neese and her husband. (Photo: YOU magazine)

Despite her post-op relief, Camilla still faces significant health challenges. Because of the complexity of the surgery, she had to spend four days in the intensive care unit. She had to be closely monitored because her body mass index was not at a safe level after the operation causing her to faint repeatedly. Before the operation she weighed 138kg and afterwards she was 120kg.

She was then released to a standard ward for six days where she had to learn how to walk all over again.

“It was quite a journey. Like watching a movie. It is still so unbelievable. I passed out quite a lot after the operation. The surgeon said it was because of the huge change in my body.”

In some ways Camilla she feels that she has gotten rid of one ailment only to be lumped with more. She suffered non-stop vaginal bleeding from the beginning of December and ended up having a hysterectomy in February. Because of all her complications doctors have warned her she is a high-risk candidate for her cancer spreading.

"I have a few medical complications that the breast condition brought on. My bones have degenerated. The specialist physician referred me to a neurologist because he suspects I have pinched nerves. I have problems sitting, standing and even walking on my own. If I fall and break a bone then it’s going to be very very bad for me,” she added.

“Being in a wheelchair is very frustrating, because I prefer to be, or try to be, in control of myself. I just don’t like being pushed around. It makes me feel even worse off.”

Also because I will be on oral cancer treatment for five years I have to move around on my own, as the treatment can cause blood clots."

So what differences can she notice since the surgery?

“I have much more mobility. I can move on my own but not for too long.  I can’t do stairs on my own. But there’s no cure for my degenerated bones.” Unfortunately, Camilla's condition has not only affected her career -- before she became ill she worked as a receptionist -- as doctors have declared her unfit to work.

It’s also affected her relationship with her husband of six years, Nazeem Neethling (37). Back in 2018 he had to give up his job as petrol-station manager to look after her. He recently found casual work at a scrapyard that puts food on the table.

“It affected our sexual life. Being intimate was a huge challenge as I was constantly in pain and just didn't feel anything. My husband never complained. Or even pulled a face.

“He says needs to make a living so he’s started the casual work.”

Despite Fawaz’s joy at being able to hug his mother, Camilla says that she can see the worry in the young boy's eyes as he takes care of her while his father is at work.

There are other problems too. Camilla is faced with medical bills that keep piling up because medical aid doesn’t cover her fibromyalgia and arthritis medication, let alone her visits to see specialists.

“It’s ridiculous that I have to choose between food and medication every month.”

Camilla, together with her friends Nazeem Neethling and Shouneez Anderson, attempted to get donations through Gigantomastia SA, the organisation she founded to create awareness around the condition and help others like her. Unfortunately this has yielded no funds at all, but they’re still hopeful.

Camilla counts her blessings. Regular visits to the psychologist have been helpful.

“Most of the specialists were surprised that I wasn't suicidal. I’ve been seeing a psychologist since I got diagnosed with chronic depression. It has helped me realise nothing happens overnight. I thought I would be able to start doing basic normal things at home after six weeks, but that, unfortunately, wasn’t possible.” she said. 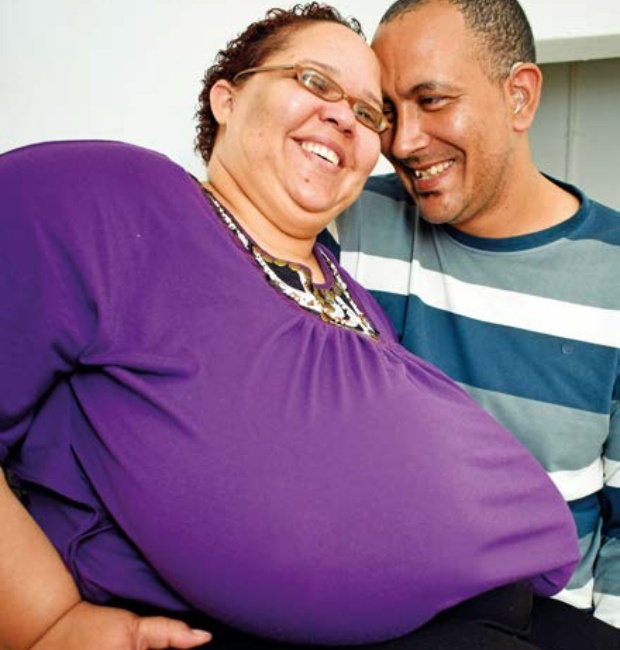 Camilla Neese and her husband. (Photo: YOU magazine)

She had high expectations of the surgery, hoping all her pains would disappear and that she would be able to start a new life.

“I thought that with the huge heavy breasts gone. I would not have so much pain; I would be able to sleep properly again. I honestly thought my life would go back to normal basically overnight. But, my psychologist has made me come to terms with the fact it will take much more than six weeks.

Camilla understands life is unpredictable but she’s adamant you can influence it, and that's why she has set goals for 2020: to stay as healthy as possible so she can be a good mom to her son and wife to her husband. And she plans on doing so one day at a time.