Malema's 'ready' for his trial 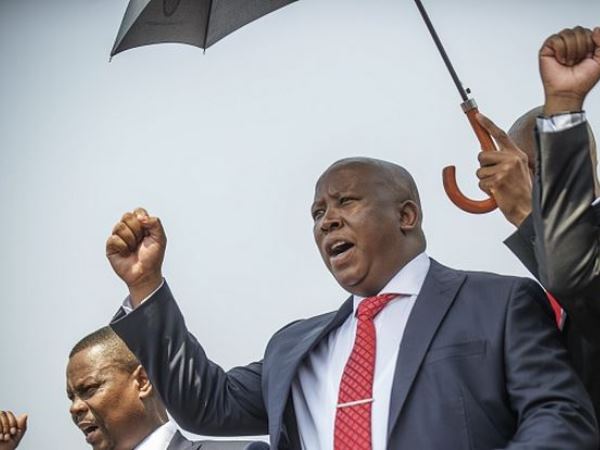 EFF leader Julius Malema is ready to stand trial, he told hundreds of supporters in Polokwane flowing the postponement of his court case on Tuesday.

"I tried to plead with them that I should be separated... and tried alone," he said.

"If others are not ready I am, the State must bring this case closer."

The trial against Malema and his co-accused was earlier postponed in the High Court in Polokwane to August 3, 2015 because not all counsel were available.

The two brothers and Moreroa were initially charged with Malema, Gwangwa and Dichabe in September 2012. They were accused of misrepresenting themselves to the Limpopo roads and transport department, leading to a R52 million contract being awarded to On-Point Engineering.

It is alleged in court papers that Malema had business ties with Gwangwa, and that Malema's Ratanang Family Trust was an indirect shareholder in On-Point.

The State alleges Malema substantially benefited from the tender payment to On-Point, using it to buy a farm and a Mercedes-Benz.

Following his appearance on Tuesday, Malema walked up the road to where his supporters, who held a night vigil for him, were waiting.

The crowed cheered as he walked onto the stage erected in a car park across the road from the Polokwane police station.

He was accompanied by Economic Freedom Fighters MPs. EFF spokesman Mbuyiseni Ndlozi began chanting "Hands off our commander and chief, hands off".

The crowd, in red berets and EFF T-shirts, took up the chant. Ndlozi then led them in song.

People took pictures with cellphones as Malema, dressed in a dark suit, white shirt and red tie, danced on stage.

Malema told the crowd he was not afraid and had nothing to hide.

"If they had a case they would have trialled (sic) us long ago."

He said his lawyer had asked the judge to try Malema earlier but was told there was no sooner available date.

Malema took the opportunity to accuse Gauteng judge president Dunstan Mlambo of interfering in matters which involved the EFF. He named a few cases including his own.

He warned Mlambo and said he would write to the Judicial Service Commission regarding his "conduct".

"They must never think we don't know what they up to. The State is against us... but don't be scared we will overcome."

He said the ANC was no longer relevant.

"My ambition is to show that there is life outside the ANC.

He said the governing party did not lead any discussions in society, unlike the EFF.

Malema said in future people would remember the ANC because of allegations of corruption.

"The ANC is at its weakest point in history."

EFF members had to submit themselves to parliamentary discipline but Malema said it was Zuma who should be facing a disciplinary hearing because he had "brought Parliament into disrepute".

However, "those who do right get punished and those who do wrong get celebrated", he said.