“I’ve always been different. I just always had a fascination with cats, and I felt myself, I’m a cat. I go through life being a cat – it’s just who I am,” Kat Lyons explains.

The 31-year-old first realised she identified as “a cat” in high school, reports Mail Online, and has been into kitten role-play ever since.

“I’ve always worn cat ears. It started when I was in high school, I don’t remember exactly what age I was but it [came from] an anime. I was like, “Oh, that’s cool. I want to be that in real life”.

But the fetish model, who hails from Colorado in the US, admits that being who she felt she really was wasn’t easy at first.

“I was bullied a lot for wearing the ears and just being a nerd,” she says of her formative years. “So, I kind of kept it a little bit hidden. I don’t think I started the ears, tail, the collar and all that stuff until later.”

“I just saw other girls doing it, so I felt more comfortable doing it myself.”

She explains that she became even more comfortable with her cat persona after meeting her boyfriend, Robrecht Berg (52), at a Comic-Con event eight months ago.

Rob, an aerospace engineer who also works as an artist and organises annual cosplay events, said that he wasn’t shocked about Kat’s role-play and supports his partner’s lifestyle choices. “She might’ve been wearing ears at the time, but I didn’t notice that,” he says. “It wasn’t until talking to her on Messenger later that I found out she was more into the kitten side of things and did that regularly since she was a teenager.”

“Everyone has something different that they do. I see it as another outlet for a person to enjoy, relax, be themselves and be creative.”

Kat mostly takes a submissive role in the relationship and considers Rob as her “master”.

Despite the fact they get judged constantly over their unique age gap, role-playing set-up, they both say they’re in a loving relationship.

But while they both love how things work for them, Kat says not everyone is positive about her kitten play.

“My family and certain people aren’t accepting, and they don’t want to know anything about it,” she says. 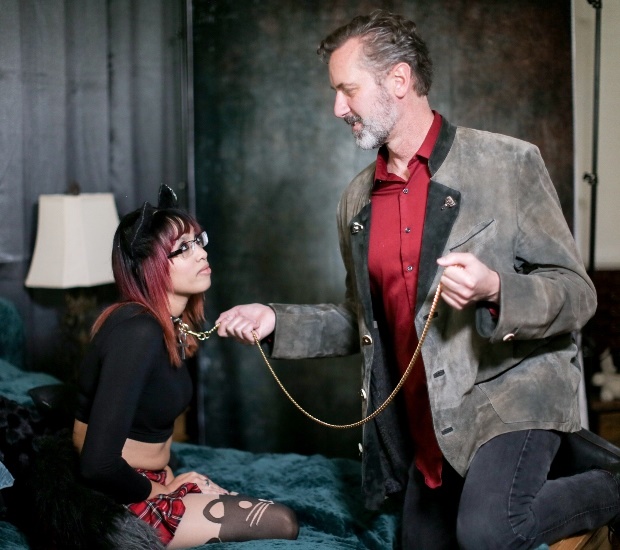 Read more on:
catwoman
LATEST YOU