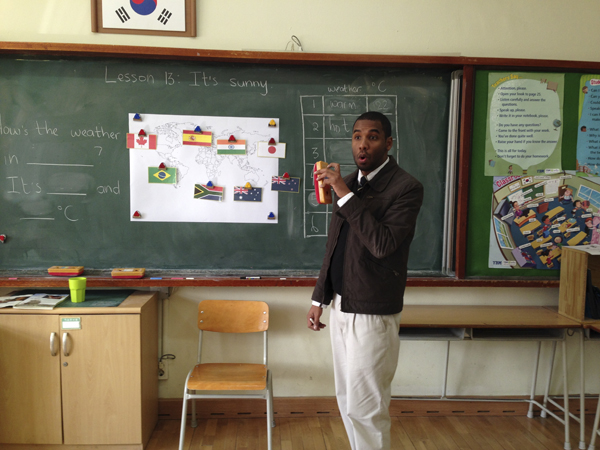 I grew up in a small country town where spoken English was minimal and mainly limited to my English classes at school. I understood English but desired to speak it better because from an early age I knew I wanted to travel one day. So I tried to speak English as much as possible – sometimes with the funniest consequences.

There are a handful of people in the world who know this story but I’ve decided to share it with YOU readers. It’s one of my most embarrassing stories but one of the lessons that helps me most when I need to empathise with my Korean students because of how difficult spoken English is for them.

One day when my mother and I were shopping in Cape Town we stopped for a fruit juice at Juicy Lucy. Because I was so eager to practise my English I told my mother to sit down while I ordered the juice. My mom gave me money and we both decided to have “lemoensap”. I headed for the counter to order.

Me: “Can I have two lemon juices, please?”

I can’t remember how much they cost but after paying I headed straight for our table to wait for my orange juice.

A few minutes later the waitress arrived with two glasses that looked too pale for orange juice. My mom wondered aloud why her orange juice was not orange. It wasn’t until I put the straw in my mouth that I realised the mistake I’d made. Instead of ordering orange juice I’d ordered lemon juice because with my unpractised English I’d translated “lemoensap” as lemon juice. My mom, whom I suspect to this day knew exactly what had happened but mercifully said nothing, graciously drank the sour drink and spared me embarrassment. We never spoke about it.

Years later, because of that experience, I can empathise with my students over the mistakes they make daily. One of those mistakes creeps in when I ask my kiddies, as I call them, if they know where I come from. I’ve been at my present school for almost 18 months but nearly every time the discussion goes like this: Me: “No, think carefully. I’ve told you before.”

The whole class murmurs because that’s clearly not the answer. After all, Joe Teacher has just said he’s not from America. Then another learner has a go.

Learner 2: “Saudi Arabia!” (because for some reason Saudi Arabia sounds like South Africa to Koreans)

Me: “No, not Saudi Arabia. That’s in the Middle East.”

At this stage I may take out a world map.

Class: “Teacher, you are from Ghana!”

They know Ghana because there’s a popular chocolate called Ghana in Korea. 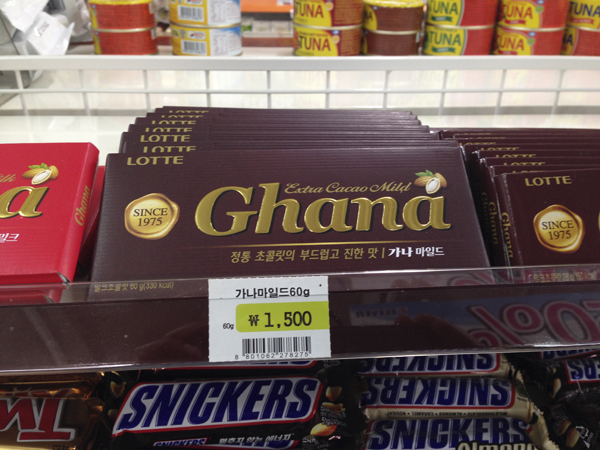 Ghana chocolates are popular in Korea

The sentence is scarcely out of my mouth when one of the children, who’s mad about soccer, shouts . . .

Another learner notes by my expression that it’s not the answer. She has the answer and reluctantly puts up her hand.

What I actually want to do is turn cartwheels and give her a high five because this is probably the 10th time we’ve had this conversation. There are many reasons for the mistakes. One of the reasons is that the sounds in the Korean phonetic alphabet don’t always allow the children to make the sounds required for correct pronunciation of English. Another reason is that they have had no exposure to African countries. Learning about the weather in other countries

I have a curriculum I must follow closely, but when I have the opportunity to teach my kiddies something about other countries, especially South Africa, I grasp it. Just the other day I was teaching a lesson on the weather to my Grade 3s. I decided to change the lesson so we could talk about weather conditions in various countries. The idea was to make my kiddies aware of the world outside Korea and as many cultures as possible. Just the fact that I am there exposes them to South African culture. I believe as a teacher it’s my duty to carry over more than just book knowledge.

In Korea children know more about Western countries than African or South American countries. This became clear to me when I arrived here in 2008. On one of my first days in the country I had to introduce myself to a Grade 1 class. They couldn’t speak English so I decided to use their teacher as an interpreter and showed them many pictures of myself, my life at home and my family and friends. When I was finished it was time for them to ask questions through their teacher. The discussion went as follows:

Me: “Do you have any questions?” The teacher said something in Korean that I didn’t understand and the class enthusiastically began to ask questions at the same time. She burst out laughing, then said, “They want to know if you have a pet dinosaur at home.” After I’d had a good laugh I decided to answer the innocent question with a white lie. I said yes and described my pet dinosaur at home. Some of the children’s eyes were the size of the old R1 piece.

The next week I had to make sure the class understood I’d just been joking and that in South Africa we kept cats, dogs and parrots etc as pets, just like them. So, very slowly, day by day, with plenty of patience and heaps of information, I was helping improve their English and expose them to the world so that they wouldn’t one day order lemon juice at Juicy Lucy.

Joe Makka is from Hopefield in the Western Cape and has taught English in Seoul in South Korea for the past five years.