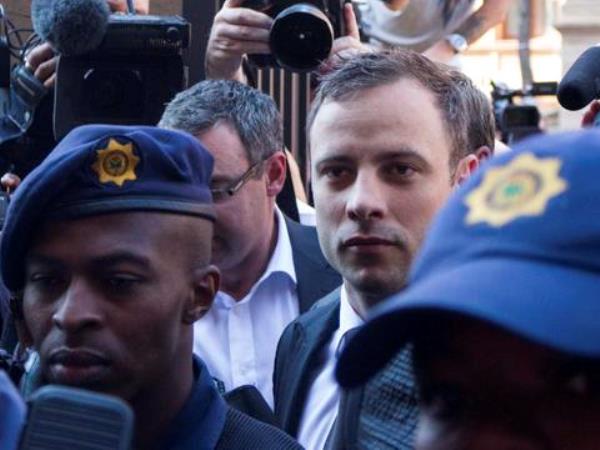 He arrived in a silver Land Rover, dressed in a black suit and white shirt. He was greeted by a large media contingent that had been waiting outside the court for him.

#OscarTrial Oscar looked at, greeted and acknowledged Reeva’s relatives as he walked to the dock. BB — Barry Bateman (@barrybateman) September 12, 2014

He struggled to make his way through as journalists and members of the public hurried to take pictures of him.

On Thursday, Judge Thokozile Masipa acquitted Pistorius of murder finding that the evidence with regard to the charge was "purely circumstantial".

However, she said Pistorius was negligent when he fired four shots into a toilet cubicle that killed his girlfriend Reeva Steenkamp on February 14, 2013.

Pistorius, 27, said he thought an intruder was behind the door of the toilet in his Pretoria home when he shot through it.

The State argued the murder was premeditated.

Pistorius pleaded not guilty to the murder charge, and to three firearm-related charges.

Steenkamp's family had arrived earlier. By 9am, Steenkamp's friends Gina and Kim Myers, dressed in black, had also arrived.

Earlier, Steenkamp's mother June, wearing a white jacket and black pants, hurried past the media contingent with her husband and her lawyer Dup de Bruyn.

Pistorius's lawyer Barry Roux arrived at court with two other lawyers in his team, and were stuck in a crowd of journalists for a few seconds.

Behind him were lawyers Brian Webber and Kenny Oldwadge who remarked: "What's going on now?", before being let in.

A team of police officers were also stationed at various points and people began lining the pathway adjacent to the court ahead of the athlete's arrival.

Pistorius will hear on Friday if he is guilty of culpable homicide.