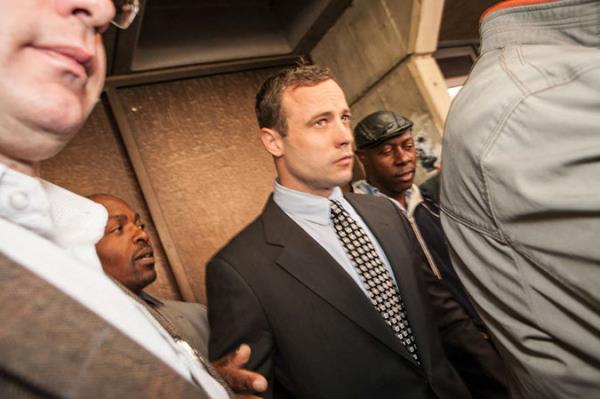 TV teams from all over the world were at the Pretoria Magistrate’s Court from 5 am this morning to capture the arrival of Oscar Pistorius. The Olympic hero, who shot his girlfriend Reeva Steenkamp dead on Valentine’s Day this year, has kept a low profile since the incident and has seldom been seen in public. He appeared in court again today.

When Oscar walked into Court B at 8.57 am he looked like a shadow of the man who’d become the face of Olympic sport.

He was dressed in a grey-blue shirt, a black and white checked tie and a grey suit. He looked pale, but kept his emotions in check and didn’t cry the way he had in his February court appearance.

This time Oscar’s appearance lasted a mere 16 minutes and 16 seconds. The State applied to have the case postponed until 19 August to enable it to investigate further.

It declined to put the finer details surrounding the application on record and had last week reached an agreement with Oscar’s defence team on the next court date. Throughout the proceedings Oscar sat without moving, his hands folded in front of him.

Oscar’s sister, Aimeé, brother Carl, uncle Arnold and other relatives sat silently in the first row in the gallery behind him. There was no sign of his dad, Henke.

Magistrate Daniel Thulare expressed concern certain media houses were trying Oscar in the media. He ordered the State’s legal team and the police to investigate how several media reports reflected badly on the court and investigations. “I also read newspapers and see the reports,” Thulare said.

Oscar was supported by his relatives when the court adjourned. Helicopters circled overhead and journalists and photographers followed Oscar outside. His bail was extended and he will appear in court again on 19 August.