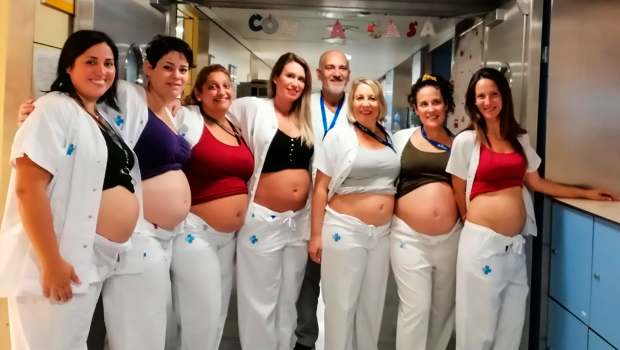 The nurses, from Spain, all work in the neonatal department of Vall d’Hebron Hospital in Barcelona.

They were captured by the head of the department, Felix Castillo, in a snap which has since gone viral.

“We have the solution to increasing the birth rate. It was given by the nurses and auxiliary workers of the neonatal service of the hospital,” the caption quipped.

“So far it’s an outbreak of known transmission, but I hope it will turn into an epidemic. The problem will be to replace them. Let’s go!” it went on.

Sandra, one of the nurses who’s in her 36th week of pregnancy, revealed that even looking after tiny premature babies daily she still faced challenges being pregnant.

“There are days that aren’t easy. You’re taking care of a baby which is 24 or 25 weeks old, sometimes it’s smaller than the one you are carrying inside yourself,” she said.

“You look at it and you look at yourself. You have to give the mom emotional support, you have the belly in the middle, you are all right, and she’s not.”