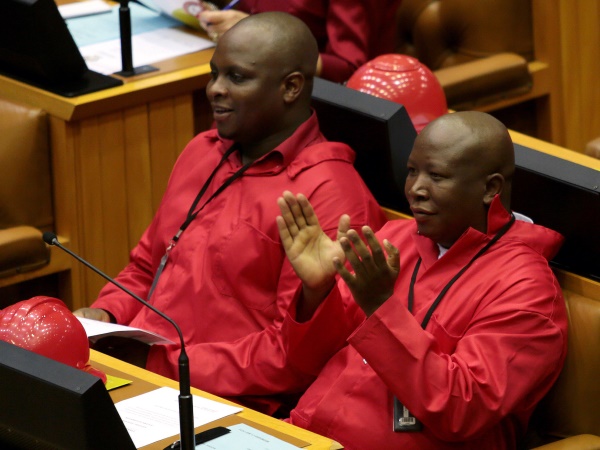 In a statement on Thursday, Shivambu tried to explain his actions captured on parliamentary television footage showing him giving Ramaphosa the middle finger shortly after being told to leave the National Assembly. "In the process of leaving the house, I raised my middle finger towards Mr Ramaphosa to express the disgust of the reality that workers have lost lives due to his pursuit of private profits and interests," Shivambu said. "I, however, realise that raising the middle finger was not necessary because there are platforms to express the utter disgust for Mr Ramaphosa's role in Marikana and everywhere else where he is involved."

Shivambu said while he would not withdraw his comments that Ramaphosa "murdered" workers at Marikana in 2012, he regretted the hand gesture.

"Instead of raising the middle finger there exists space and time to express honest and truthful observations on his role in the counter-revolution," he said.

"I therefore publicly withdraw the middle finger and will bring this to the attention of the House in the next sitting of the National Assembly."

Both Shivambu and EFF leader Julius Malema were ordered to leave the House during question time on Wednesday.

"Why is the deputy president not accepting responsibility for the death of 34 mineworkers that died? You killed them because you are driven by profit," Malema said.

"You are the one who wrote e-mails and instigated the killing of 34 people. Your hands have got blood... of people who died in Marikana."

Ramaphosa, who sat on the Lonmin board at the time of the violent strike at Lonmin's mining operations at Marikana, near Rustenburg in the North West in August 2012, was questioned about his testimony before the Farlam Commission of Inquiry last month.

The commission was appointed to probe the deaths of 44 people during the violent wage-related strike.

Thirty-four people, mostly striking mineworkers, were shot dead by police, about 70 wounded, and 250 arrested on August 16, 2012. Ten people, including two policemen and two Lonmin security guards, were killed in the previous week.