Am I the only one?

...Who can't watch The Fixer (called Scandal in the US) without enjoying the wonderful Olivia Pope's gorgeous outfits?

I'm so pleased season two has started on M-Net. It's probably one of my favourite series with all that political intrigue, backstabbing and those star-crossed lovers: Olivia, the woman who rules Washington, and Fitz, who just happens to be the married president of America.

But Olivia's tailored suits and designer coats should be winning Emmys! They are a character on their own and the show's costume designer, Lyn Paolo, is an absolute genius. And Shonda Rimes (also creator of Grey's Anatomy) is a genius for creating the show and hiring both Lyn and actress Kerry Washington.

In season one that white Tory Burch trench coat (see picture) made it very clear this woman will win, this is a woman we all want to be (though the stress levels must be off the charts when you're solving murders and presidential disasters). And when she wears dresses, she pulls out a white Michael Kors dress with black lace waist detail (see picture, I can't wait to see it in episode 7 in a few weeks' time), designed to make her competition, the First Lady, look like a frump. Yes, Mellie, I said frump.

When she lounges around sipping wine after hours, it's in silky loungewear. And don't even get me started on her pyjamas; she could attend a party in her stylish cashmere and silk sleepwear and we'd all think it's the latest cocktail wear.

I also love that she wears outfits more than once, like a normal person. But actually I know I'm not the only one fixated on Olivia's style; there are blogs and tumblr blogs dedicated to her outfits and gifs created to showcase them.

Designer Lyn told CNN the clothes are about making the character and it certainly works because if I saw Kerry Washington in that white trench coat across the road, I'd be racing over to talk to Olivia before remembering she probably prefers to be called Kerry when on holiday in Cape Town.

Lynn added, "If you're really doing your job, you're making it easy for an actor to inhabit that person's skin . . . They can walk into their trailer in the morning, don the costume and all of a sudden, they become that other person."

And it's carefully planned that Olivia always stands out. "When you talk about Washington DC, you think of dark grey and navy blue. Everyone pretty much looks the same . . . My idea was we should always have Olivia Pope stand out in some way." So Lyn puts her in pale greys, whites and some pastels to show she's "feminine and strong". Genius, right?

I want to make Olivia my best friend and if that's not possible I'm at least moving into her cupboard, where I intend to laze about among the Guccis, Armanis and Diors, sipping wine and announcing to my imaginary gladiator minions, "It's handled". 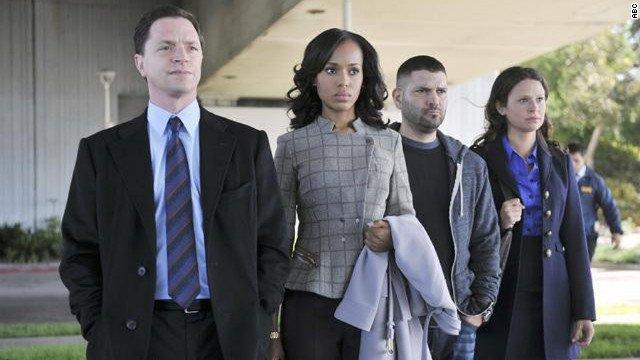 In an elegant Armani jacket Olivia, in a gorgeous Michael Kors dress, with the president and Mellie