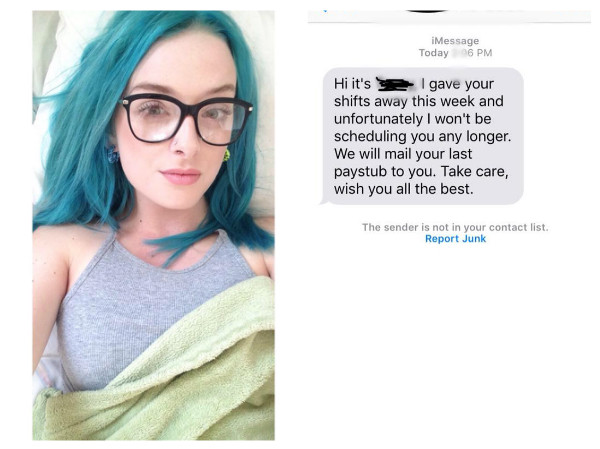 Danielle Duperreault was fired last week -- not for tardiness or not doing her job, but for having a severe allergic reaction.

Last Monday, the Canadian woman was doing her shift at a local Urban Planet clothing store when she ate some of her colleagues' seasoned nuts, not realising they contained bell peppers -- which she's severely allergic to.

It didn't take long before she realised that she was going into anaphylactic shock.

"I called a manager upstairs and one came up asking me what was wrong, at that point my airway was already closing," she shared on Facebook.

"She proceeded to show a tremendous amount of attitude," she wrote, adding that she did not have an epi pen on me at the time because hers was expired and she needed to get a prescription for a new one.

According to the retail worker, the manager told her to go look for an epi pen in her car "then proceeded to of wander off".

"Meanwhile I’m getting fainty and I’m vomiting, I went out to my car and searched for one but no luck. So I go back into the store, gurgling and clutching my throat while customers and a few staff around me were freaking out and that same manager stood calmly at the computer typing away."

Danielle then went into the store's back room where a male staff member "basically had to carry me up the stairs and get my stuff for me, because was so lightheaded I could [barely] stand up, and I couldn’t feel my extremities".

"I go to clock out when I hear a colleague of mine yell ‘should I call an ambulance’ the manager ignores her. I clock out and she calmly says ‘text me when you get to the hospital.’ (I’m clearly not able to drive.) Where my friend meets me in the parking lot (another employee on her way into work) I motion her to come over and without hesitation she takes the keys and rushes me to a medical clinic."

At that time, her throat had "completely closed" and she "nearly passed out due to lack of oxygen".

"The manager then fires both of us via text message," she revealed, referring to a screenshot of the text message her manager sent.

"I firmly believe that there should always be an epi pen on hand in every store. Who knows if a customer needs one in an emergency, or someone who doesn't know they have allergies and doesn't own an epi pen.

"The doctors said if I would have waited another ten minutes I would be dead."

Danielle says she shared her story to raise awareness about allergies in the workplace.

"There should be training on how to administer an epi pen, how to handle a situation like that, and how to deal with the aftermath," she wrote in the post which has garnered more than 17 500 shares.

Urban Planet took to Twitter to respond to the viral story.

"Simply put, the actions were unacceptable," the retailer said in a series of tweets.

Read more: Teen fired from new job for a tweet "We are also moving quickly to ensure all of our store management clearly understands our expectations in a situation like this."

In regards to the incident in Saskatchewan. We have thoroughly investigated this. Simply put, the actions were unacceptable. — Urban Planet (@Urban_Planet) June 24, 2016

Con't: While we have a duty to respect confidentiality in Human Resource matters, we can state the following: — Urban Planet (@Urban_Planet) June 24, 2016


Con't: Our CEO apologized to the employee personally, as will the manager. — Urban Planet (@Urban_Planet) June 24, 2016

Con't: We are also moving quickly to ensure all of our store management clearly understands our expectations in a situation like this. — Urban Planet (@Urban_Planet) June 24, 2016