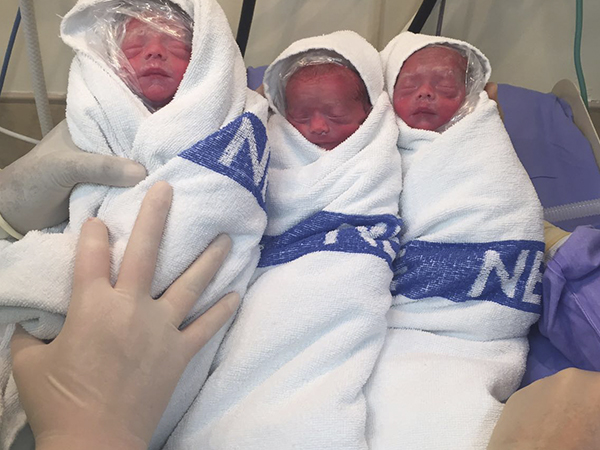 When you’re planning your family you hope to have a healthy baby with 10 fingers and 10 toes.

So imagine the joy of the Van der Merwe family when they brought not one, not two, but THREE premature – and healthy – babies home.

“My husband Gareth (41) and I realised that with in vitro fertilisation (IVF) there was a chance of having twins, but we didn’t consider the possibility of triplets,” says Ronelle van der Merwe (34), from Boksburg.

They also knew twins and triplets were often born prematurely – but they never dreamed their little trio would arrive at 26 weeks.

Early in March, Ronelle's water broke and the worried couple rushed to see their gynaecologist in Pretoria. "He booked me into hospital right there and then," Ronelle remembers. She was put on strict bed rest until she went into labour.

The parents-to-be expected it to take another couple of weeks, but it happened just days later, and doctors performed an emergency Cesarean.

"When they came out they were purple! And so small, so fragile," Ronelle says. "So when they took the babies away, I was really frightened."

But she and Gareth were allowed to see their baby daughter and sons ? who they had decided to call McKayla, Mason and Liam ? the following day in the intensive care unit. Ronelle, her mom, Bridget, and Gareth take the little ones home for the first time. PHOTO: Facebook

The babies had to spend 78 days in the neonatal care unit before they could go home, which was incredibly tough for Ronelle and Gareth.

“The first three weeks were difficult because they had quite a few health problems, but by the time they came home they were healthy.”

They have been at home since 28 May. “We’re incredibly privileged that they’re healthy and have no medical concerns whatsoever,” she says of the babies, who are now about five months old.

Only Mason’s eyes need more treatment. As sometimes happens with premature babies, his retina didn't completely form. Fortunately, doctors were able to operate before he left hospital and he's no longer at risk of going blind. He just needs to see the doctor for follow-ups now, his mom says.

“We can see how each one is beginning to develop their own personality,” Ronelle says of McKayla, the eldest, and her younger brothers, Mason and Liam.

Gareth has two children from a previous relationship, Tyla (15) and Nathan (16), but the trio are Ronelle's first children.

"I keep asking my husband, 'Is the difficult part still coming?'," she jokes.

"I mean, it's not easy," she qualifies, "It's tough when they all cry at the same time.

"But they're sleeping well, they don't have colic ? they're just angels." ‘They all want attention at the same time!’: Roodepoort’s parents of adorable identical triplets certainly have their hands full

These twins were born from two separate wombs