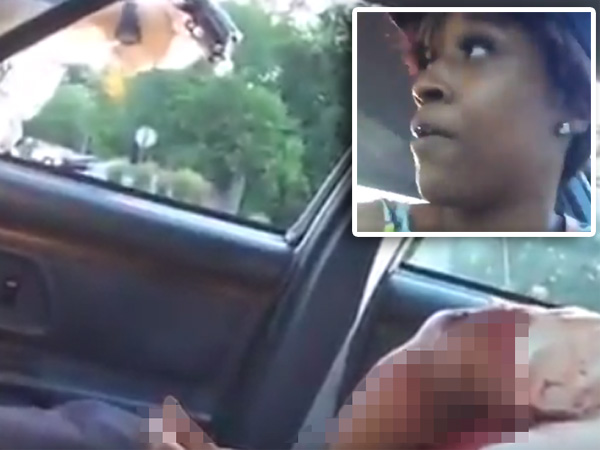 A woman in Minneapolis in the US livestreamed her boyfriend’s death after he was shot next to her in the vehicle they were travelling in last night.

“Stay with me,” she says while her cellphone shows a bloodied man hunched over in the driver’s seat.

She explains that the pair got pulled over by police officials for driving with a broken tail light. “And the police, they killed my boyfriend,” she adds.

According to her video, the police pulled over Lavish Reynolds and her boyfriend, Philando Castile (32), at about 9 pm and instructed him to produce his driver’s license and identification. She says Philando explained to the officer that he had a weapon on him, but was licensed to carry it.

Once Philando reached for his wallet in his back pocket, the officer shot him four times, she says. At this point she started documenting the incident.

Philando, who worked as a supervisor at a nearby school’s cafeteria, can be seen writhing with pain in the seat next to Lavish.

The irate officer yells at Lavish and later removes her from the vehicle and instructs her to get on her knees. Her young daughter, who was in the back seat of the car, can be heard crying.

“We are in the back seat of a police car,” Lavish says into the camera. “The police just shot my boyfriend for no apparent reason,” she adds again.

She states her address and asks if someone who is watching the livestream can come to her rescue and help her. “My phone is about to die. The police have me handcuffed.”

Philando’s mother, Valeria Castile, told a TV-reporter from WCCO TV in Minnesota her son “lived by the law and died by the law”.

His uncle added to The Star Tribune that his nephew had worked in the school cafeteria for 12 to 15 years, “cooking for the little kids.” He added that Philando was “a good kid”.

The nearby St. Anthony Police Department said in a statement: "On 7 July 2016 at approximately 21h00 hours, a St. Anthony Police Officer affected a traffic stop on Larpenteur and Fry in the City of Falcon Heights, Minnesota. During the stop, shots were fired. One adult male was taken to the hospital. We have been informed that this individual is deceased.”

The officer has reportedly been placed on leave while the incident is investigated.

Social media reacted with shock and protests have erupted in the light of increasing incidents of police brutality against African Americans in the country.

The 2014 deaths of minors like Michael Brown from Ferguson and Tamir Rice from Cleveland caused widespread outcry, with a video showing 43-year old Eric Garner from New York pinned to the ground while mouthing “I can’t breathe” as police choked him to death causing equal uproar.

“We will stand our ground,” protesters outside the police station chanted, reports The Daily Beast. “We will not move.”

Lavish was released from police custody today, and was greeted by dozens of reporters.

"They took his life for no reason," she told them.