Woman loses staggering 57kg – but is now ‘thin-shamed’ by friends 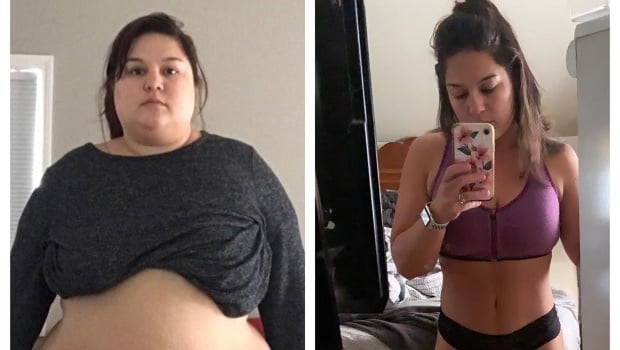 Nicole Caperilla from Connecticut in the US had been overweight since childhood.

Even though she was struggling emotionally, mentally and physically with being overweight, the 31-year-old continued her bad eating habits.

To help her lose weight, she had weight-loss surgery in 2017, which removed a large part of her stomach, restricting the quantities she’s able to eat.

Within just two weeks of her surgery, Nicole started hitting the gym five to six times a week and decided to change her eating habits.

She now eats a lot of protein-rich foods such as chicken, ground turkey and fish.

Nicole aims to maintain her weight.

“I’ve struggled with my weight since I was a child but got rid of it. It wasn’t until the first pregnancy I put on so much weight and couldn’t lose it,” Nicole said.

“I tried every diet and supplement to lose it and it wasn’t budging.

“By January 2017 I’d had enough. I’d seen pictures of myself that friends had taken and was surprised. I jumped onto the scales and felt really disappointed and upset with myself when I saw the reading of 266 pounds (120kg). “I knew I had to make some changes to my habits and decided to have VSG [vertical sleeve gastrectomy] weight-loss surgery in June 2017.

“I changed my diet right away and started eating a high-protein diet. I get my protein from things such as lean meats, beans and protein supplements. I’ll have oatmeal for breakfast, sweet potatoes and veggies for lunch and protein and veggies for dinner. I also eat a lot of fruit now, which I rarely did before.”

Although Nicole has had amazing support from her husband, Charlie, she opened up about the difficulties she had with some of her close friends, who’ve had a problem with her significant weight loss.

“Although I never received any nasty comments to my face, I did receive rude comments after my weight-loss success from some of the people closest to me. I’m talking about friends I’d had all my life,” Nicole said.

“They weren’t supportive at all. They’d criticise everything about me and put me down, not realising their jokes hurt. They’d judge or joke about what I was wearing and tell me I wasn’t perfect. They were negative.

“It took me a long time to come to realise they were just jealous with the help of some friends and my husband, Charlie. I realised I didn’t need to have people like that in my life.

“My husband and other friends have been incredible, and I’ve made so many new supportive friends too,” she said.

Nicole feels a deep sense of pride in her achievements and revealed that her journey helped her realise her career goals.

“I’m so proud of myself for losing weight and my internal transformation too. I’m more positive, I empower others, I make goals and I chase them and achieve them,” Nicole said. “If you want to lose weight then my advice would be to start today. Don’t even wait for Monday to come around. Do it now, and absolutely do it just for you.

“I had so much self-doubt. I think we all do. Never in a million years would I have ever imagined I’d be where I am today. I changed my life around and even became a personal trainer because I want to help others do the same.

“It’s possible and guess what? It feels so good to be healthy.”