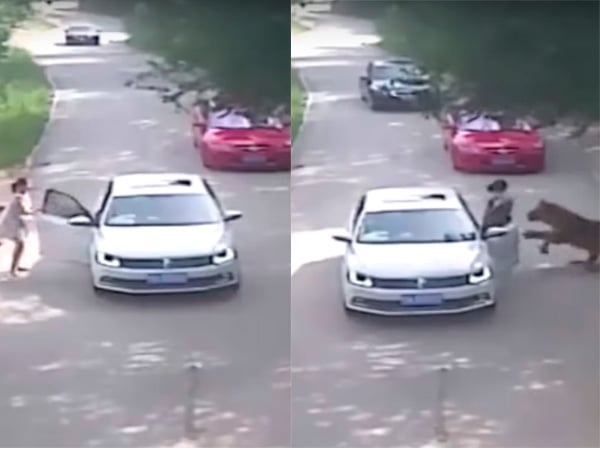 A family outing to Beijing Badaling Game Park at the foot of the Great Wall turned to tragedy when one of the visitors climbed out of the car in which they were travelling.

This despite the fact visitors are prohibited from leaving their vehicles when in unfenced areas.

According to ITV, the family in the car were arguing, prompting the woman to climbed out and walk round the vehicle to the driver’s side.

The driver opened his door but she was still outside for a few seconds, apparently in conversation with him.

It’s not known whether she was warned by one of the other passengers – but if she was it was too late. The tiger struck with lightning speed, burying its claws in her flesh and dragging her powerfully into a clump of bushes.

The driver leapt out, hesitated for a moment, then gave chase. Then another woman jumped from the car and they set off after the tiger together.

The first victim was saved by park officials. The second woman, who’d gone to her aid, was actually attacked by another tiger but did not survive the attack.

The man and a child who were in the car escaped unharmed.