37 years and counting: How Goldie Hawn and Kurt Russell’s relationship has stood the test of time Goldie and Kurt attend a fundraising event for Goldie’s The Hawn Foundation in California in 2017. PHOTO: GETTY IMAGES / GALLO IMAGES

When it comes to enduring Tinseltown romances, things don’t get much warmer and fuzzier than this one.

The couple first hooked up while working together in 1983 but it was more than just Kurt Russell’s acting talent and good looks that attracted Goldie Hawn to him.

“I loved the way he looked at my children,” the 75-year-old actress said during a recent appearance on The Ellen DeGeneres Show.

“It was really something special. He's good at that. He's good with kids. And I kind of went, "Oh my God, this is amazing’.”

Goldie had a boyfriend at the time, but she dumped him over the phone to be with Kurt.

“Yeah, that was hard,” she said. “That was hard, because I had to call him and tell him we were done and that I found somebody and I'm so sorry . . . but it was really interesting because I fell in love but I also fell in like. And those are two pretty good deals.”

The couple recently celebrated 37 years together but say they have no “secret” for long-lasting romance.

"Sometimes, it takes a little finagling. Sometimes things don't go your way. But the point is you have to go deeper. You've got to find out what's going to get in the way of a love story.

"Though the two have vowed never to marry, their commitment seems stronger than ever. Here’s a look at the timeline of their epic love story.

They met on the set of a Disney movie

Goldie and Russell became acquainted while filming The One and Only, Genuine, Original Family Band but they weren't quite ready to start dating yet.

"I was 21 and he was 16," Goldie recalls. "I thought he was adorable, but he was much too young. Then, years later we met up again, and I remembered that I liked him very much when I first met him." Goldie's first film credit was the Walt Disney musical The One and Only, Genuine, Original Family Band (1968) in which she starred alongside John Davidson. A young Kurt Russell (right) was also in the cast. PHOTO: WALT DISNEY PICTURES

Even someone as charming and handsome as Kurt couldn't resist the opportunity to woo Goldie with a corny pick-up line.

"I was severely hungover and I didn't know Goldie at all outside of having worked with her those years before. I just didn't have in my mind what I was going to see, and she had a great body. So the first thing that came out was, 'Man, you've got a great figure'. It came out quickly and it could've gone wrong, and she said, 'Why thank you’." While the two were filming Swing Shift, they went out one night after work. They ended up talking for hours and decided to continue the fun at a house Goldie had recently purchased to renovate.

There was just one thing: she didn't have the key yet, so they were forced to break in.

They were in what would become the bedroom when the police walked in. “That was our first date," Kurt recalls. The cops didn't ruin the night, though, as the couple finished their date in a hotel room. The pair are pictured enjoying a date at New York’s The Carlyle Hotel in 1983. PHOTO: GETTY IMAGES/GALLO IMAGES Goldie and Kurt welcome their only child, son Wyatt

Goldie and Kurt later welcomed their first and only child together, Wyatt Russell (34), in 1986. Wyatt, Kate and Oliver are all accomplished actors. The couple enjoying a seaside outing in California with fellow actors and former couple Don Johnson and Melanie Griffith, as well as Kate, Oliver and Wyatt in 1990. PHOTO: GETTY IMAGES / GALLO IMAGES

Kate says Kurt filled the shoes of father for her and Oliver. "Kurt is my dad,” she told Vanity Fair in a past interview. “Kurt is a saviour who came into my life. [Bill] was sort of in and out of our lives . . . I don’t hate him for it." Goldie and Kurt at a New York event with Kate, Oliver and Wyatt in 1997. PHOTO: GETTY IMAGES / GALLO IMAGES

They starred in Overboard together

Although Goldie has said that they don't watch their own movies, she did admit that the two recently enjoyed a screening of their 1987 comedy Overboard. "You know how sometimes you forget why you fell in love? I remembered everything, and why I fell in love. It was really something to be able to watch that,” the Death Becomes Her star told British talk-show host James Corden. The couple’s third joint project was 1987 comedy Overboard, in which Goldie plays a rich heiress and Kurt a carpenter who tricks her into falling in love with him. PHOTO: GETTY IMAGES / GALLO IMAGES

Not the marrying kind

The couple have always been forthcoming about not walking down the aisle.

"We have done just perfectly without marrying," Goldie told Woman’s Day in 2007. "I already feel devoted and isn't that what marriage is supposed to do? So as long as my emotional state is in a state of devotion, honesty, caring and loving, then we're fine. We have raised our children brilliantly; they are beautiful people. We did a great job there and we didn't have to get married to do that. I like waking up every day and seeing that he is there and knowing that I have a choice." 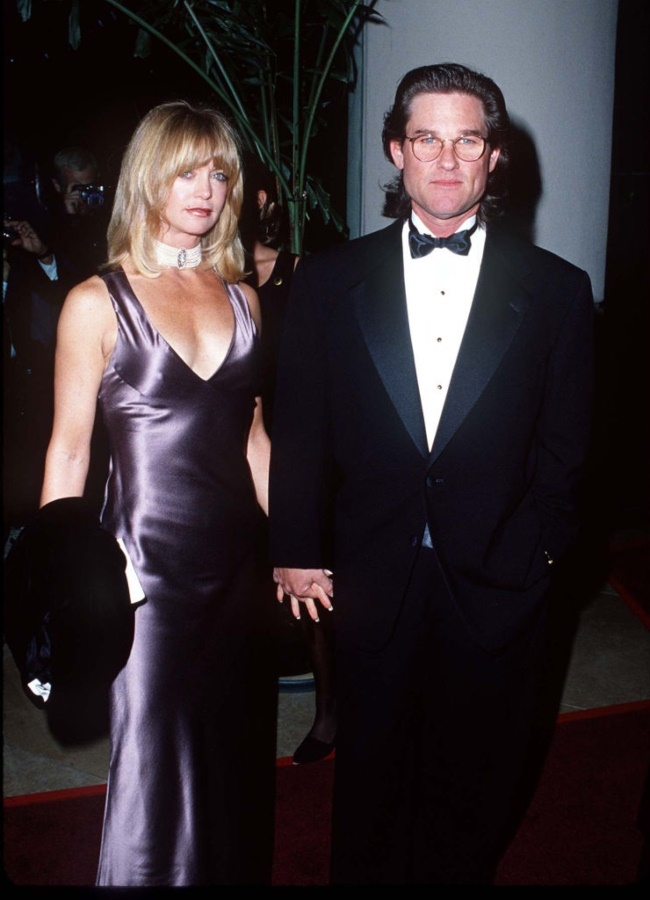 During a2016 interview she also confirmed she doesn't spend every waking hour with Kurt.

"In a healthy, longer-term relationship, I would say it's great to be together about 68 percent of the time." On the red carpet at the 2007 amfAR Gala in Cannes. PHOTO: GETTY IMAGES / GALLO IMAGES

They receive a dual star on the Hollywood Walk of Fame

In May 2017, the legendary actors received not one but two stars on the Hollywood Walk of Fame and even smooched during the ceremony.

"It turned out to be a lovefest," Goldie later admitted of the ceremony. "The last thing he said was, 'I’ll always cherish you'. I didn’t expect him to say those things. I had no idea he was going to be so beautiful." The pair were honoured with a double star ceremony on the Hollywood Walk of Fame on 4 May 2017 in Hollywood, California. PHOTO: GETTY IMAGES / GALLO IMAGES

Here they are doting on her last December.

The couple can also clearly still stand spending long hours together on set and will soon appear together in upcoming Netflix holiday sequel The Christmas Chronicles 2.

We live in a world where facts and fiction get blurred
In times of uncertainty you need journalism you can trust. For 14 free days, you can have access to a world of in-depth analyses, investigative journalism, top opinions and a range of features. Journalism strengthens democracy. Invest in the future today. Thereafter you will be billed R75 per month. You can cancel anytime and if you cancel within 14 days you won't be billed.
Subscribe to News24
Next on You
Kirstie Alley had many highs and lows before her death of colon cancer at 71