Amy Schumer: ‘I can’t be pregnant ever again’ 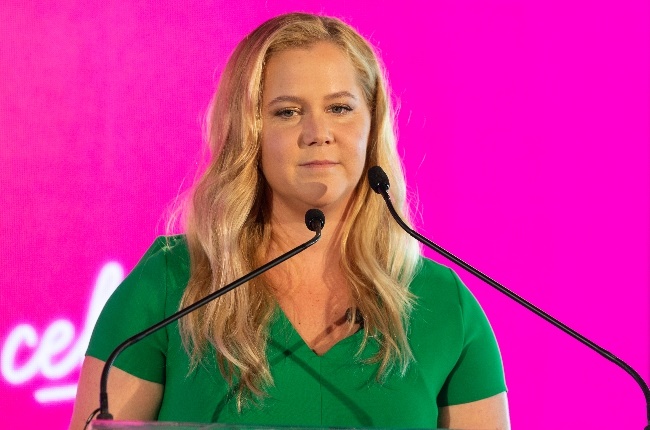 In vitro fertilisation is not for sissies. Just ask Amy Schumer.

During an interview with Willie Geist on Sunday Today, the American comedian opened  the challenges she and her husband, Chris Fischer, faced while trying to conceive their second child through IVF.

As a result, the 39-year-old, who has a one-year-old son, Gene, said she is shelving her plans to have a second child.

“We did IVF and it was really tough on me. I don't think I could ever do IVF again,” Amy told the host. “So I decided that I can’t be pregnant ever again.

“We talked about a surrogate, but I think we’re going to hold off for right now.” The 39-year-old said she is shelving her plans to have a second child. (Photo: Gallo Images/Getty Images)

Earlier this year, the I Feel Pretty actress took to Instagram to share that she and Chris were freezing their embryos in hopes of growing their family soon.

“Hey! So IVF went like this for us,” Amy captioned her post, alongside a selfie of her smiling. “They retrieved 35 eggs from me. Not bad for the old gal right? Then 26 fertilised! Whoah right?”

“For all of those we got 1 normal embryo from that and 2 low level mosaic [mosaic means there are some abnormal cells but can still lead to a healthy baby] So we feel lucky we got 1! But what a drop off right?

"I just wanted to share and send love and strength to all of the warrior women who go through this process.

“My number is in my bio if you are open to text me your experience or whatever you feel like. I read them when I can’t sleep or have time,” she ended her post.

I’m a week into IVF and feeling really run down and emotional. If anyone went through it and if you have any advice or wouldn’t mind sharing your experience with me please do. My number is in my bio. We are freezing my eggs and figuring out what to do to give Gene a sibling. ??

Amy’s first pregnancy was no walk in the park either.

On her HBO Max docuseries, Expecting Amy, the Hollywood actress revealed that she was diagnosed with hyperemesis gravidarum – a severe form of morning sickness that causes nausea and vomiting during pregnancy, according to Healthline. It’s the same illness suffered by Kate, Duchess of Cambridge, in her three pregnancies.

While suffering from the debilitating condition, Amy had to continue with her standup comedy show.

“It was really, really hard, but I think probably every woman can relate strangely enough. Because for me going onstage and doing a show like that, even though it’s physical and everyone’s looking at you, it’s still my job.

“And so if you’re a teacher or a nurse or something, if you’re really sick, and you’re pregnant, and you still have to work, no one gives you any leeway. They really don’t,” she explained.

The Snatched actress now hopes to enjoy her time at home with her husband and baby Gene, People reports.

“We’re all feeling a lot of grief but I’ve had some precious time with my family,” Amy said.

“Chris and I were talking about it. We haven't been apart for even a night, a dinner, for so long.

“But it is not as hard as I thought it was gonna be. I like staying home a lot. I like also not seeing anyone at all. You know, it’s like hmm maybe, I’ll live like this forever.” Amy now hopes to enjoy her time at home with her husband and baby. (Photo: Gallo Images/Getty Images)

Amy isn’t the first celeb to open up about her IVF experience.

Before baby Luna was born in April 2016, John Legend and Chrissy Teigen revealed that they’d struggled with infertility and resorted to IVF to conceive.

In an interview with Harper’s Bazaar, the mom-of-two, who is expecting her third child with the Grammy-award winning singer, described her IVF process as a miracle.

“It’s also easy to grow resentful of how easy it is for some people, when you’re literally mixing your own powders and chemicals to inject into your belly, shoving progesterone up there," Chrissy said. "It’s almost like one of those things where there’s a light at the end of the tunnel. It’s like the physical pain of labor.

“Once your baby is actually born, you don’t remember that pain at all. When you go through IVF, it does feel like, 'Oh it’s not fair I have to do all this.'

“Still, it’s a complete miracle when it works. There are so many people that still struggle, even with access to IVF.”

Friends actress Courteney Cox also opened up about her infertility issues after being told that she has a rare antibody which prevents her from carrying a baby to full term. “I remember one time I just had a miscarriage and Rachel was giving birth," Courteney (56) said in an interview with Dateline NBC. “It was like that same time. Oh my God, it was terrible having to be funny.”

We live in a world where facts and fiction get blurred
In times of uncertainty you need journalism you can trust. For 14 free days, you can have access to a world of in-depth analyses, investigative journalism, top opinions and a range of features. Journalism strengthens democracy. Invest in the future today. Thereafter you will be billed R75 per month. You can cancel anytime and if you cancel within 14 days you won't be billed.
Subscribe to News24
Related Links
Amy Schumer has ‘really good’ sex with husband once a week for this reason
Joburg mom gives birth to ‘miracle baby’ after a decade of trying
Ovarian cancer survivor defies the odds to give birth to a healthy boy
Next on You
SEE THE PICS: Sarah Jessica Parker bares her beach bod in the same swimsuit she's been wearing for seven years