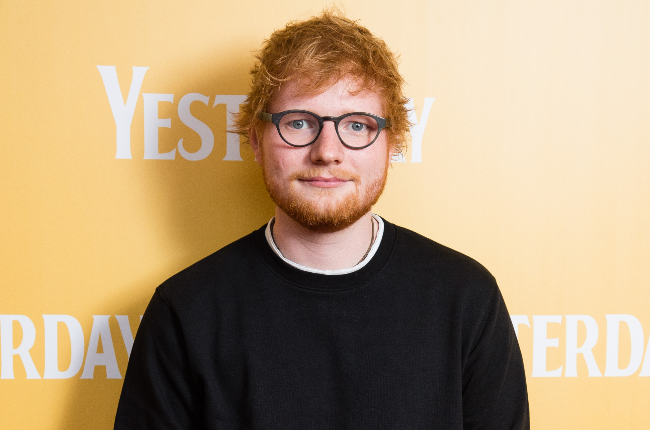 He’s built his $110 million fortune by selling records – but there is one body of work Ed Sheeran really, really doesn’t want you to add to your collection.

A rare copy of the ginger crooner’s first demo album is being auctioned and Ed is dying of embarrassment.

The 29-year-old muso recorded Spinning Man in 2004 at the age of 13, after experiencing his first heartbreak.

Opening up about the demo in his 2014 book Ed Sheeran: A Visual Journey, he revealed that 19 of the 20 copies he made were in his possession and confessed he didn’t want anyone getting their hands on one.

“In 2004, I made my very first album, Spinning Man, named after a picture that my dad had,” Ed wrote. “I burnt the CDs myself and made the covers. There were 14 songs, and they were all songs that rhymed. One lyric went: 'I'm a typical average teen if you know what I mean'.”

The Shape of You singer added, “Most of the songs were about a girl called Claire. She was my first love when I was 13.

“It was a very innocent love, and we only ever held hands, but it lasted a fair amount of time. Then came my first devastating break-up.

“Looking back, it really wasn't that bad, but at the time it was soul-shattering. When she left me, I wrote a lot of songs off the back of it – my first love songs.”

Some of the titles on the album sum up Ed’s teenage angst, including Misery, On My Mind and the cringeworthy Moody Ballad of Ed.

Ed was apparently staying with relatives and sleeping on their sofa, making money by busking, when he gave a signed copy to a relative’s friend.

That friend’s brother, a 48-year-old guy called Kevin who doesn’t want to give his surname, is now selling the CD after discovering it long-forgotten in a drawer.

"At the time Ed Sheeran was this just this wee, ginger-haired busker and he thought nothing of it. He didn't realise he would go on to be one of the world's biggest pop stars."

Kevin adds he was impressed when he heard the CD.

"The quality of the songs was really good and I was shocked by how good he was on the electric guitar. He sounds like Eric Clapton at moments.

"I play guitar. The fact that he was playing like that when he was 13, he must have been talented from the start."

The album has one distinct feature. "Most of his other CDs – or all of them, as far as I know – have a sticker on the disk, saying 'Ed Sheeran Spinning Man'.

"But for this one he'd run out of stickers, so he wrote his name on the disc and handed it to my brother. So, it might be the only signed copy."

The CD features cover photography by Ed's artist dad, John Sheeran, and is expected to fetch £10 000 (nearly R230 000) when it goes under the hammer at Omega Auctions next month.

Auctioneer Paul Fairweather described the CD as "an important artefact in contemporary music history and a milestone in the development of one of the world's biggest pop stars.

“We’ve no doubt it will attract worldwide attention.”

We live in a world where facts and fiction get blurred
In times of uncertainty you need journalism you can trust. For 14 free days, you can have access to a world of in-depth analyses, investigative journalism, top opinions and a range of features. Journalism strengthens democracy. Invest in the future today. Thereafter you will be billed R75 per month. You can cancel anytime and if you cancel within 14 days you won't be billed.
Subscribe to News24
Related Links
Baby joy for Ed Sheeran and his wife Cherry Seaborn
Ed Sheeran gets candid about his addictive personality: ‘That was probably the lowest I’ve been’
Next on You
Rupert Murdoch and Jerry Hall are divorcing after six years: how will the media titan share his $17 billion fortune?