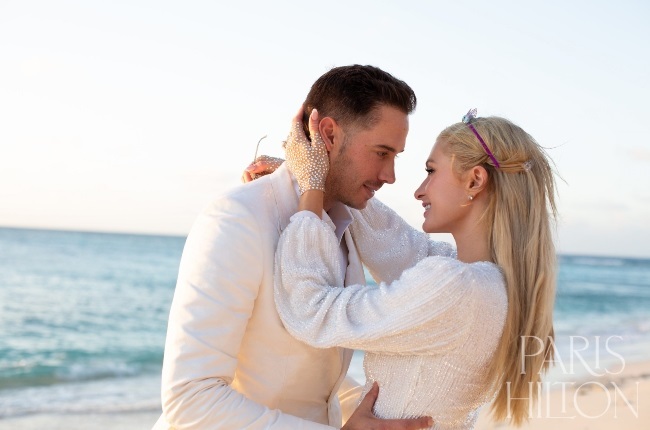 She’s now been a fiancée four times and Paris Hilton is convinced that this time it’s forever.

The hotel heiress took to her website this week to announce her engagement to entrepreneur Carter Reum.

The couple, who’ve been together for just more than a year, both donned white ensembles as Carter (40) popped the question while on a holiday on a private island.

In videos posted to Instagram, Paris shared snippets of their special day and gushed about her husband-to-be.

“When you find your soulmate, you don’t just know it. You feel it,” Paris captioned the post.

“My love and I have been together since our first date, and for my birthday he arranged a special trip to a tropical paradise.”

“As we walked to dinner along the beach, Carter led us to a cabana adorned with flowers and dropped to one knee,” Paris continued.

“I said yes, yes to forever. There’s no one I’d rather spend forever with.”

As expected, the ring is a stunner. Pictures show an emerald-cut diamond ring designed by Jean Dousset, great-grandson of jewellery magnate Louis Cartier. The ring Carter proposed to Paris with. (Photo: Parishilton.com)

The betrothal is Paris’ fourth – and each engagement ring looks better than the one that went before. Take a look. After their split, Paris got to keep the engagement ring Chris Zylka bought her. (Photo: GALLO IMAGES/ GETTY IMAGES)

In 2018 The Leftovers actor dropped down on bended knee during a New Year’s Eve weekend ski trip in Aspen, Colorado.

The ring featured a gorgeous tear-drop-shaped diamond and cost a cool $2 million (then R29 million).

“I was shaking as I put it on,” Paris told People magazine at the time. “It’s the most beautiful ring I’ve ever seen!”

After their split later that year Paris admitted she kept the 22-carat whopper designed by celebrity jeweller Michael Greene.

During an interview on The Jenny McCarthy show, Paris explained she felt she gave the jewellery designer “millions and millions of dollars of free publicity,” so he let her keep it. Maybe having the same name was a sign it’s meant to be? The pair had been dating for eight months when Paris popped the question to Paris in May 2005.

The Greek shipping heir gave her 15 rings to choose from and Paris settled on a 24-carat canary diamond ring worth $4,7 million (then R30,5 million), according to E! Online.

But the Parises split up fewer than six months later. She was 21 when she got engaged to Jason Shaw. (Photo: GALLO IMAGES/ GETTY IMAGES)

Although not much is known about the ring, by the looks of things it must’ve cost a fortune.

Paris was only 21 when she started dating the American model. They were engaged the following year but called it off a year after that as she wasn’t ready for such a commitment, according to a source.

We live in a world where facts and fiction get blurred
In times of uncertainty you need journalism you can trust. For 14 free days, you can have access to a world of in-depth analyses, investigative journalism, top opinions and a range of features. Journalism strengthens democracy. Invest in the future today. Thereafter you will be billed R75 per month. You can cancel anytime and if you cancel within 14 days you won't be billed.
Subscribe to News24
Related Links
Why Paris Hilton wants to have twins
Paris Hilton claims boyfriends abused her: ‘I can’t believe I let people treat me like that’
Paris Hilton on ending her engagement: 'It was the best decision I’ve ever made in my life'
Next on You
Denise Richards posts to X-rated OnlyFans site after being inspired by daughter Sami