His teeth are falling out and he can barely see: Harvey Weinstein’s lawyer claims he’s too sick to face charges in Los Angeles According to Harvey Weinstein’s lawyer, the disgraced producer is “almost technically blind at this point and in need of surgery.” (PHOTO: Getty Images)

During his trial in New York last year, the disgraced Hollywood super-producer was often seen hobbling into court on a walking frame – and after he was found guilty he had to be admitted to hospital for heart problems.

Now it seems his health woes have continued unabated. If his legal team is to be believed, Harvey Weinstein is too frail to go on trial in Los Angeles and proceedings should be delayed on humanitarian grounds. Harvey has been accused by various women of sexual misconduct (PHOTO: Getty Images)

Weinstein (69) faces 11 charges of sexual assault brought by five women, who allege they were attacked by the movie mogul between 2004 and 2013. The charges include rape, forcible oral copulation and sexual battery.

He is currently serving a 23-year sentence in Wende Correctional Facility in New York after being found guilty last year of rape and sexual assault involving an actress and a production assistant. He is appealing his conviction.

Weinstein is now due to face the music in LA but his attorney, Norman Effman, claims the disgraced producer has serious health issues which are grounds for delaying the trial. Effman says his client is “almost technically blind” and in need of eye surgery and has several dental procedures scheduled after he lost four teeth. 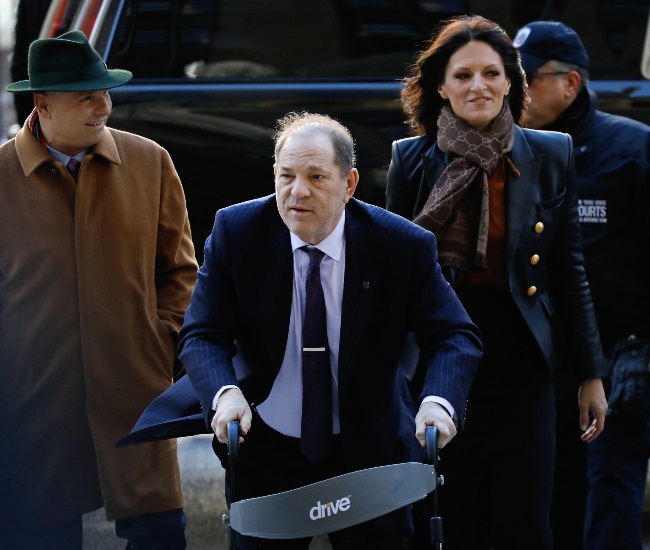 “For humanitarian reasons, he should continue getting medical treatment until he is well enough to stand trial,” Effman said, adding he was not attempting to avoid the hearing.

“[Weinstein] has a good defence to these charges and is confident it will result in an acquittal.”

The former Hollywood hotshot, who co-founded mega-movie company Miramax and later The Weinstein Company, has been the subject of rape and sexual harassment accusations dating back to the 1990s.

His conviction last year was a watershed moment for the #MeToo movement against sexual abuse and harassment by men, including powerful, influential figures such as Weinstein. A-list stars Angelina Jolie, Gwyneth Paltrow, Cate Blanchett and many others came out publicly about the abuse they endured at his hands.

His behaviour was an open secret in Hollywood, with filmmakers Seth MacFarlane and Quentin Tarantino among those who admitted they were aware of his behaviour.

Among the accusations he has faced is that he forced women to massage him and watch him naked. He is also alleged to have promised to help advance their careers in return for sexual favours.