Hollywood holiday homes waiting for you to rent To celebrate 30 years of The Fresh Prince of Bel-Air, Will Smith has Uncle Phil’s mansion on Airbnb (with the permission of its current owners) for only $30 (R508) a night!

Will and his TV BFF, DJ Jazzy Jeff, took a tour of the Bel-Air mansion, which they posted on YouTube.

“Alright, I’ll stay. I know it is supposed to be for other people but I need this for myself,” he says in the video as he shows off Fresh Prince memorabilia lining the walls, including limited edition sneakers and outfits from the 30-piece clothing line created to celebrate to the show’s anniversary.

Before you start filling out leave forms and reaching for your credit card, the mansion has already been booked until September 2023. Guests will have full access to one wing of the enormous house.

Don’t be too sad – there are plenty of other homes made famous on the big and small screen available to rent.

Tony Stark’s lakeside retirement cabin in the woods was one of the more memorable settings in the superhero epic. Rental prices start at $800 (R13 556) a night for this home with breathtaking views, a 30-minute drive from Atlanta. Twilighters can fulfil their fantasies of staying in Charlie and Bella Swan’s home from $330 (R5 592) per night. The owner of the five-bedroom, 1930s-style home, kept the original Twilight set designs after filming wrapped. Fans of the BBC/Netflix series Sherlock will recognise this Victorian home. The luxury six-bedroom house can accommodate up to 10 people, from $505 (R8 557,48) per night. The drawing room and master bedroom suite featured in the episode A Scandal in Belgravia, and the dining room was Captain Latimer’s study in the 2012 Dr Who Christmas special. Victorian Gentleman's residence from Sherlock and Doctor Who (Photo: AirBnB)

Spice up your life by staying in the original Spice Girls bus from the movie Spice World, for only $166 (R2 812) a night. The interior has been renovated to accommodate an overnight stay. The bus is located on a marina so you can also enjoy a walk to bars, restaurants or nearby shops.

The Reversible Destiny Lofts from Girls in Tokyo, Japan

You can follow Shoshanna Shapiro’s footsteps when she left The Big Apple for Tokyo and stay in this unique loft in the western part of Tokyo, Mitaka-shi, from $198 (R3 355) a night. Guests will find themselves in a uniquely designed, colourful and circular loft. Fans have the opportunity to live it up like the aristocratic Crawley family in this castle with rooms priced from $166 (R2 812) a night. The enormous castle has 300 uniquely furnished rooms and a Downton Abbey gift shop, which sells memorabilia from the popular series and movie.

This is not Walter White’s house (that’s just a 30-minute drive away) – it’s the house Walter and Jesse used to cook meth while it was tented and fumigated, in season 5, episode 3, hence its name – House 5.3. Yellow hazmat suits are included with the rental price of $165 (R 2796) a night.

This is the home where Harry lived with his parents, James and Lily, before their deadly encounter with Voldemort. To relive those moments, Potterheads can rent its two bedrooms for $196 (R3 321) per night, which includes a full English breakfast.

Who didn’t love Ryan Reynolds in Definitely, Maybe? A private bedroom from his movie house, in Ditmas Park, is available at $75 (R1 270) per night. The house was also featured in the series Damages, with Glenn Close. 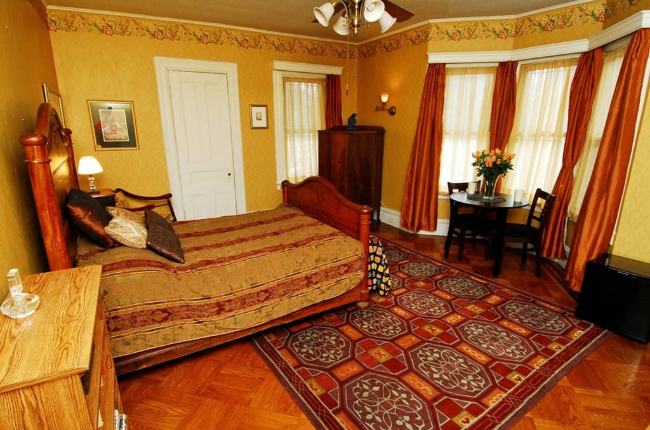 This three-bedroom guesthouse doubled as the childhood home of Golden Girl Blanche, which she and her gal pals visited regularly for getaways. Packed with GG memorabilia, you can get away here too, for $215 (R3 643) per night.

We live in a world where facts and fiction get blurred
In times of uncertainty you need journalism you can trust. For 14 free days, you can have access to a world of in-depth analyses, investigative journalism, top opinions and a range of features. Journalism strengthens democracy. Invest in the future today. Thereafter you will be billed R75 per month. You can cancel anytime and if you cancel within 14 days you won't be billed.
Subscribe to News24
Related Links
Zendaya's euphoric rise
THE BIG READ: How I took on Hollywood & won
We chat to Talitha Bateman about her new sci-fi series Away
Next on You
Malia Obama has moved on after her breakup and is dating someone nearly a decade older than she is