Kendall Jenner is launching her own brand of the potent Mexican spirit under the name 818 (Photo: Getty/Gallo Images)

Is it tequila o’clock yet?

It certainly is for Kendall Jenner (25), who is launching her own brand of the potent Mexican spirit under the name 818.

She revealed to her Instagram followers that, “After dozens of blind taste tests, trips to our distillery, entering into world tasting competitions anonymously and WINNING...3.5 years later I think we’ve done it!”

“This is all we’ve been drinking for the last year and I can’t wait for everyone else to get their hands on this to enjoy it as much as we do!”

There’s no word yet on when we can start doing shots of 818 – or how much it costs – but Kendall’s tipple of choice is produced in Mexico and named after the phone area code of the Kardashian-Jenners’ hometown, Calabasas.

READ MORE| Cheers to these surprising health benefits of booze! Find out if your favourite tipple comes

When it’s released, it will be in three varieties, Kendall says: blanco – the clear one, usually best for margaritas; añejo – an aged tequila, best for sipping; and reposado – a well-rested drink, which has spent two to 12 months ageing in oak barrels and is also great for mixing.

Momager Kris Jenner (65) was elated at the announcement, tweeting, “Kenny! I am so so proud of you and the years of work and love you’ve put in to @drink818!! So excited for this!!! Everyone go follow @drink818.”

Kenny! I am so so proud of you and the years of work and love you’ve put in to @drink818!! So excited for this!!! Everyone go follow @drink818 NOW!! @kendalljenner #DRINK818 #818TEQUILA #repost pic.twitter.com/kXUNeasd3r

She and sister Kylie collaborated on a clothing range in 2013 and they launched a line with Revolve in 2019. Kendall is the latest celeb to endorse a brand of tequila.

Here are the others making money off branded booze:

The Rock launched his brand, Teremana Tequila, last year. It is produced in Jalisco, a small town in Mexico. The singer launched his tequila brand in 2009 and in 2014 he collaborated with Sauza Liquors to relaunch it as Sauza 901. Rita is a creative director and shareholder of Próspero, a tequila brand that is produced solely by women in Jalisco, Mexico. It was founded in 2019. 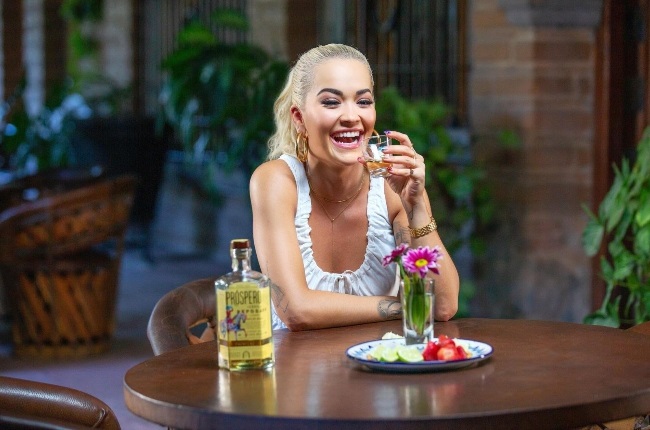 After holidaying in Mexico, the Jumanji actor launched his tequila brand, Villa One Tequila, in collaboration with designer John Varvatos in 2019. The Maroon 5 frontman and his singer-songwriter pal Sammy Hagar launched Santo Mezquila in 2017. Sean “Diddy” Combs owns a share of Ciroc Vodka. Jay-Z owns Ace of Spades champagne. Ryan Reynolds has the American gin brand Aviation. George Clooney co-founded Casamigos Tequila with his friends Rande Gerber and Mike Meldman before selling it in 2017. And Cara Delevingne and her sisters Poppy and Chloe have a Prosecco line called Della Vite.

We live in a world where facts and fiction get blurred
In times of uncertainty you need journalism you can trust. For 14 free days, you can have access to a world of in-depth analyses, investigative journalism, top opinions and a range of features. Journalism strengthens democracy. Invest in the future today. Thereafter you will be billed R75 per month. You can cancel anytime and if you cancel within 14 days you won't be billed.
Subscribe to News24
Related Links
SNAPPED! See the pics that show celebs are just like us sometimes
His Royal Hiveness! Charles is selling his own honey
Jamie Spears 100% threatened my life: Britney’s cousin speaks out as the drama continues
Next on You
Lisa Marie Presley has some strong thoughts and feelings about new film Elvis – and she's not shy to share it