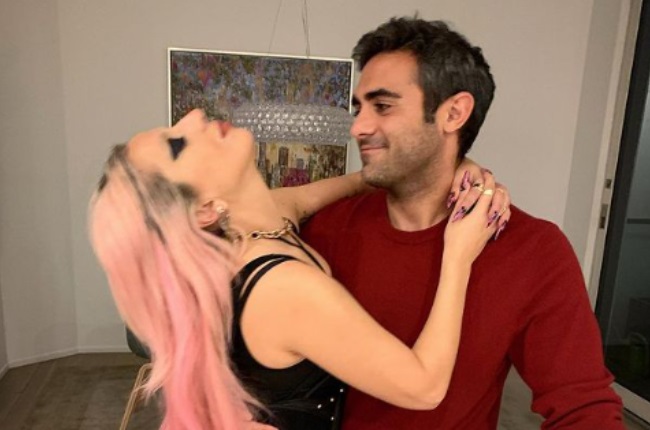 The singer recently took to Instagram to gush over her boyfriend, investor and entrepreneur Michael Polansky. (CREDIT: Instagram / @ladygaga)

Right now, Lady Gaga has everything she needs in life: a man she adores and her beloved dogs safe and sound.

Her two French bulldogs, Koji and Gustav, were kidnapped in a dramatic incident last month but returned unharmed two days later, after Gaga offered a $500 000 reward.

The star's dog walker, Ryan Fischer, was shot during the crime and recently opened up about his harrowing road to recovery.

In a lengthy Instagram post Ryan shared that, after returning home from the hospital to "start a path to healing," he discovered a "strange hissing and glugging" from his chest every time he took a breath. As a result, he was readmitted to the hospital a week after getting discharged. Ryan continued to describe how his lung collapsed multiple times during his second stay at the hospital.

"It became quite clear that my lung was not healing, and the bullet wound had scarred my tissue like a burn," he wrote. "It could take months, if ever, for the hole to seal."

He eventually had portions of his lung removed and he's now out of the hospital and working through the trauma of his experiences.

"The journey is hard, it's assuredly painful . . . but I try. And somewhere within that I find the absurdity and wonder and beauty this life offers us all."

As for Gaga, she has been filming House of Gucci in Italy with Adam Driver.

But the distance didn't stop her from celebrating her 35th birthday on 28 March.

The Million Reasons crooner took to Instagram to share a picture of the enormous bouquet her boyfriend, Michael Polansky, sent her. In the caption the Oscar winner thanked Michael while also mentioning her beloved pooches.

"When your bf sends you all the flowers in Rome for your birthday," the Stupid Love singer wrote. "I love you honey . . . I can't wait to be home with you and our dogs, that's all I need."

Gaga and Michael (44), a tech investor, were first linked at a New Year's Eve party in Las Vegas in 2019. Two months later, they went Instagram official when the A Star is Born star shared a photo of herself cuddled up with Michael on a yacht.

Their relationship is pretty low key – made even more so by the pandemic – but we have managed to get a few glimpses of Gaga’s guy.

He was her date at President Joe Biden and Vice President Kamala Harris' inauguration in January and the couple even managed to sneak in a masked kiss on camera.

Michael isn’t only romantic but well-educated and rich, too.

He’s a Harvard University graduate and serves as the founder and executive director for tech entrepreneur Sean Parker’s non-profit organisation, The Parker Foundation. According to his LinkedIn, he has served as CEO for The Parker Group, which houses the Sean’s various charities and businesses, for the past decade.

Gaga, who’s currently filming Ridley Scott’s highly anticipated House of Gucci in Rome, appears to be in a great place in her life right now. But there was a time when she was in a rather dark place.

Last year she opened up about how she “did not like being single” and felt “like my career had taken over everything”.

“My personal life was something I didn’t get much time to pursue and have control over and I got very sad.”

She dated Luc, a nightclub owner, in 2005 and reunited with him in 2010. In 2009 she told Rolling Stone: “I really never loved anyone like I loved him. Or like I love him”. After their final split she admitted that “the relationship really shaped me,” and inspired her 2010 hit You and I. The Grammy-winning record producer worked on multiple hits on Gaga’s debut album, The Fame, and he was also credited with creating her stage name. Their year-long romance ended badly in 2007, when he called her a “woman scorned” in a lawsuit and demanded a portion of merchandising and revenue. Gaga dated the designer from 2009 to 2010. Not much is really known about their relationship, but she did give a little insight into what being with him was like during a 2010 interview: “We were crazy lovers, but I stopped it when we discovered what a strong creative connection we had.” The Chicago Fire star and Gaga dated for four years before they got engaged. Taylor proposed on Valentine's Day with a heart-shaped ring but the couple called off their engagement in July 2016 and split shortly after she got the role in A Star Is Born. She dated the talent agent for two years and they got engaged in October 2018 but split up a few months later. “It just didn’t work out,” a source told People at the time. “There’s no long dramatic story. It always seemed Christian was more into the relationship than Gaga was.”