Mamma Mia! No such thing as too many affairs for Dominic West Sources claim that Dominic West is in late-stage discussions for the role of Prince Charles in season 5 of The Crown, though the deal isn’t done. (PHOTO: GALLO IMAGES/GETTY IMAGES)

Dominic West can’t get enough of affairs, it seems.

The British actor, who starred in the hit TV series The Affair, caused a sensation when pics emerged recently of him getting up close and personal with Mamma Mia! Here We Go Again actress Lily James. And now, in another case of life imitating art, the 51-year-old actor is in the running to play a philandering Prince Charles in the fifth season of hit Netflix show The Crown.

The drama will chronicle the crumbling marriage between Charles and Diana as rumours of infidelity swirled about the prince and the great love of his life, Camilla Parker Bowles. “He has a very method approach to acting, doesn’t he,” one user said dryly.

Dominic is best known for playing unfaithful husband Noah Solloway in The Affair and hit the headlines big time after he and Lily were snapped cosying up in Rome earlier this month. According to a witness, Dominic – who has been married to Irish landscape gardener Catherine Fitzgerald since 2010 – couldn’t stop kissing Lily’s neck and stroking her during a boozy lunch at a restaurant.

“They really knocked back a lot of wine and Lily looked a bit worse for wear,” the insider tells Page Six news. And the intimate moments reportedly didn't end there. “They then visited a nearby church and Dominic placed his hand on Lily’s butt,” the witness says. Sources have also claimed that the pair – who are filming a BBC adaptation of Nancy Mitford's novel The Pursuit of Love – spent two nights in a suite at Rome's Hotel de la Ville.

However, as soon as the pictures came to light, the actor staged a bizarre photo op with his wife outside their home in Wiltshire, England. The couple – who have four children, Dora (14), Senan (12), Francis (11) and Christabel (5) – kissed for the cameras and handed photographers a note which read, “Our marriage is strong and we’re very much still together.” 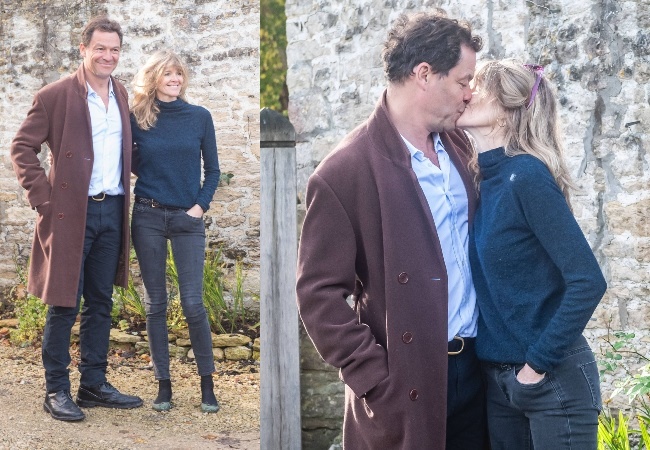 After pictures of his cosy Roman holiday with Lily James came to light Dominic and his wife staged a photo op outside their home in Wiltshire, England. (PHOTO: GALLO IMAGES/GETTY IMAGES)

Dominic has made a number of off-the-cuff comments about marriage and infidelity over the years and pretty much summed up his views in an interview with London’s Evening Standard in 2016.

“I think women should be more indulgent of affairs,” he said. “I really do. It’s daft to kick someone out over a fling. Isn’t it? Everyone should turn a blind eye to men’s behaviour between the ages of 40 and 50. Let it all blow over.”

Well, there you have it.