Tom Cruise lays down the law on Mission: Impossible 7 set The action-packed film, directed by Christopher McQuarrie, is scheduled to be released in theatres in November 2021, provided there aren't any further delays due to Covid-19. PHOTO: Getty Images / Gallo Images

Doing death-defying tricks, fighting baddies, learning his lines – that’s all a piece of cake for Tom Cruise, but getting crew to use common sense and obey social distancing laws is proving to be a Mission Impossible, and it’s making his blood boil.

Things have reportedly become very tense on the set of the new movie and after Tom recently erupted into angry rants on two occasions, staff saw red, resulting in five deciding to quit on the spot.

Apparently the 58-year-old star expressed his frustration with crew members on the set of Mission: Impossible 7 after he saw two crew members standing less than a metre away from each other at a computer screen at Warner Bros Studios in Leavesden, England.

In an audio clip that was leaked to British tabloid The Sun, Tom can be heard admonishing not only the culprits but the whole crew.

"If I see you do it again, you're f***ing gone. And if anyone in this crew does it, that's it – and you too and you too. And you, don't you ever f***ing do it again," Tom can be heard saying in an expletive-laden tirade in which he seems to channel his Mission: Impossible character, Ethan Hunt.

"We are not shutting this f***ing movie down. Is it understood? If I see it again, you're f***ing gone."

"We are not shutting this fucking movie down! ... If I see it again, you're fucking gone."

“We are the gold standard. They’re back there in Hollywood making movies right now because of us. Because they believe in us and what we’re doing. I’m on the phone with every f***ing studio at night, insurance companies, producers and they’re looking at us and using us to make their movies. We are creating thousands of jobs, you motherf*****s. I don’t ever want to see it again. Ever!”

Just a day after the expletive-filled audio clip was made public, a source told The Sun that it was hardly an isolated incident and there has been “more anger” at the already “tense” production.

Apparently just a day after Tom’s rant was leaked, he lost his temper again, though it’s not known if it was related to the Covid issue, with the result that five cast members decided to quit on the spot.

As a producer on the hit movie franchise, Tom has good reason to be anxious.

“He just can't take any more after all the lengths they have gone to just to keep filming at all,” an insider says. “He's upset others aren't taking it as seriously as him.”

The megastar is so invested in making sure filming can continue that he personally paid around $671 000 (R9,9 million) for the movie's cast and crew to isolate on an old cruise ship when the cameras aren’t rolling. 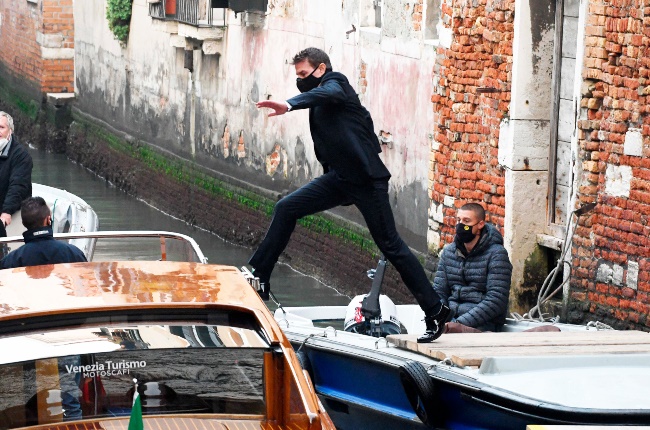 Tom plays superspy Ethan Hunt and is the face of the Mission: Impossible franchise, which has grossed nearly $3 billion at the box office since the first instalment hit cinemas in 1996. PHOTO: Getty Images / Gallo Images

“He didn’t overreact because it is a problem,” George said on Howard Stern’s SiriusXM radio show.

George, however, added that if he’d found himself in a similar situation, he might have handled it differently.

“I wouldn’t have done it that big. I wouldn’t have, you know, pulled people out,” he said. “You’re in a position of power and it’s tricky, right? You do have a responsibility for everybody else and he’s absolutely right about that. And, you know, if the production goes down, a lot of people lose their jobs. People have to understand that and have to be responsible. It’s just not my style to, you know, to take everybody to task that way.”George continued. “I understand why he did it. He’s not wrong at all about that. You know, I just, I don’t know that I would have done it quite that personally, but I don’t know all the circumstances so maybe he had it 10 or 15 times before.”

Mission: Impossible 7 has been hit with multiple Covid-related delays during filming over the past months around Europe. Many of the vital scenes were due to be shot in Italy, which was at one point was the epicentre of the world's pandemic.

In October, the Top Gun star held crisis talks with director Christopher McQuarrie after 12 crew reportedly tested positive for Covid-19. Last month, a shoot involving 150 extras was cancelled due to a Covid scare on set.

According to reports, the screen icon has also urged members of the public to remain socially distanced from one another as they hang about to watch the action sequences being filmed.

This isn’t the first time Tom’s intimidating behaviour on the set of the billion-dollar-grossing franchise has hit headlines.

Earlier this year, Thandie Newton described her experience working opposite a "really stressed" Tom on the 2000 film Mission: Impossible II.

When asked why she never filmed another Mission: Impossible movie, the Westworld actress merely said, "Oh, I was never asked. I was so scared of Tom. He was a very dominant individual. He tries super-hard to be a nice person. But the pressure. He takes on a lot. And I think he has this sense that only he can do everything as best as it can be done."

She also recalled an incident on set in which the pair attempted to finish a night scene on a balcony.

“We filmed the entire scene with me being him – and him playing me. And it was the most unhelpful . . . I can't think of anything less revealing. It just pushed me further into a place of terror and insecurity. It was a real shame. And bless him. And I really do mean bless him because he was trying his damnedest." Another one of Tom’s earlier co-stars, Rob Lowe, recently recounted an incident he had with the star while they were on the set of 1983 film The Outsiders.

During an appearance on the podcast Armchair Expert with Dax Shepard, the 56-year-old actor said that Tom went ballistic after he learnt that they would be roommates in New York during the auditioning process.

“We check-in and Tom finds out that we're sharing a room and just goes ballistic."

He continued, “To me, what's great about the story is, there's certain people who have always been who they are, and that element of them has powered them to where they are today, and the rest is history.“

And the notion that an 18-year-old actor with a walk-on part in Endless Love and like a seventh lead in Taps could have that kind of, like, wherewithal. I remember going, 'Wow, this guy is the real deal’.”

The Parks and Recreation star added that it was humorous, but it showed Tom’s drive.

"I mean it made me laugh, it was gnarly," he added. “But at the end, you can't argue with the results, he's had his eye on the ball since day one.” We live in a world where facts and fiction get blurred
In times of uncertainty you need journalism you can trust. For 14 free days, you can have access to a world of in-depth analyses, investigative journalism, top opinions and a range of features. Journalism strengthens democracy. Invest in the future today. Thereafter you will be billed R75 per month. You can cancel anytime and if you cancel within 14 days you won't be billed.
Subscribe to News24
Next on You
Chef gets salty about Victoria Beckham’s 'bizarre' eating habits and requests