WATCH: Baby No 2 for The Bold & The Beautiful’s Jacqueline MacInnes Wood 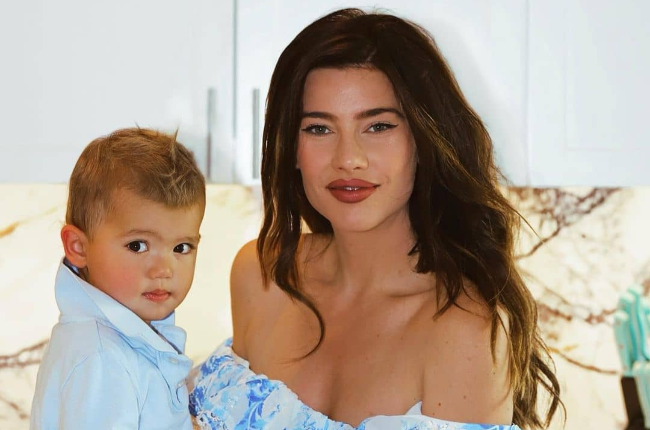 “Once you pop, the fun don’t stop!” That’s how Jacqueline MacInnes Wood, the actress who portrays Steffy Forrester in The Bold and the Beautiful, revealed that she’s expecting her second child.

The Canadian actress broke the news on social media in an Instagram video.

Along with the cheery caption the 33-year-old soapie star added a string of pregnant emojis and also revealed that she’s 23 weeks along.

Jacqueline and her husband, Hollywood talent agent Elan Ruspoli, got hitched in 2018 and have a 19-month-old son, Rise Harlen.

Shortly after breaking the news, Jacqueline shared a sensual picture of herself naked on a white horse, captioning the snap, “Someone asked me on IG live, “What’s next on your bucket list?” Well, to answer your question . . . this. Lol”

Someone asked me on IG live..”what’s next on your bucket list?”... well, to answer your question... this. Lol.

She’s been playing the part of Steffy in The Bold since May 2008 and in 2019 won a Daytime Emmy award for best actress in a drama series for her work on the long-running soap.

Jacqueline isn’t shy of sharing pics of her first-born, Rise, on social media.

“My world,” she wrote in September next to an Instagram pic of the little boy, in celebration of America’s National Sons Day.

Rise is just as stylish as his beautiful mom, who often dresses her firstborn in designer clothes by big-name designers such as Versace.

From her social media, it’s clear Jacqueline has enjoyed spending quality time at home during the Covid-19 pandemic.

A few months back she posted a pic of her and Rise in matching outfits, with the caption, “Something positive about this quarantine? For me, it’s being with my family, organising things I haven’t had time to organise, finally trying the food I had in the back of my cupboards – which has been quite tasty! Learning new things (like salsa dancing, practising Italian, new recipes). I’m trying to make the most of it!

What’s been something positive about this quarantine? For me..it’s being with my family, organizing things I haven’t had time to organize, finally trying the food I had in the back of my cupboards.. which has been quite tasty!..learning new things like (salsa dancing, practicing Italian, new recipes) I’m trying to make the most of it!

We live in a world where facts and fiction get blurred
In times of uncertainty you need journalism you can trust. For 14 free days, you can have access to a world of in-depth analyses, investigative journalism, top opinions and a range of features. Journalism strengthens democracy. Invest in the future today. Thereafter you will be billed R75 per month. You can cancel anytime and if you cancel within 14 days you won't be billed.
Subscribe to News24
Related Links
YOUR MONEY | Three questions about pregnancy, your job and covid-19
Cute alert! Roxy Burger welcomes baby No 2
Why Princess Eugenie will refuse a title for her baby if the queen offers it as a gift
Next on You
This is why it's important that the new Little Mermaid is played by a black actress