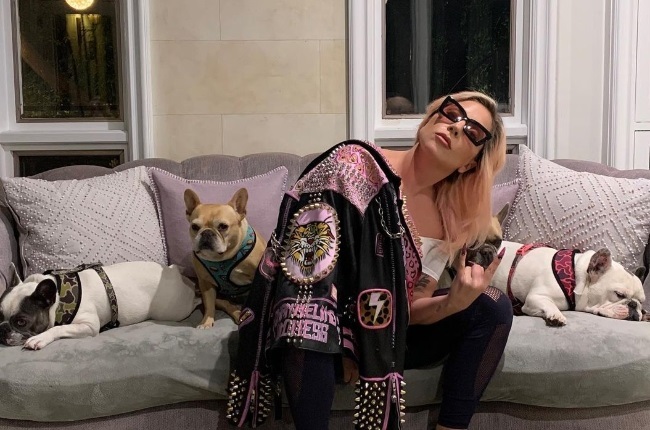 A glance at Lady Gaga’s social media account will tell you one thing: the singer is crazy about her pups.

Her French bulldogs, Koji, Gustav and Miss Asia, are all over the feed, whether she’s cuddling them, dressing them up or simply surviving the lockdown blues with them by her side.

So you can only imagine the horror the 34-year-old must’ve felt when she heard the news: her precious pooches had being involved in a traumatic dognapping at gunpoint in Hollywood, Los Angeles.

Home-surveillance footage shows the drama unfolding: Ryan Fischer, Gaga’s dogsitter, is walking down the road at 10pm with the animals when a white sedan approaches.

Two men climb out of the back, one of them telling Ryan (30) to “give it up”. Ryan appears to wrestle with the attackers and yells for help.

Moments later a shot is fired at Ryan, who collapses on the pavement. Gustav and Koji are taken – one of the dogs can be heard yelping in the footage – but Miss Asia manages to escape. Ryan, bleeding on the ground, cuddles the dog as neighbours rush to help and the police are called.

“We heard blood-curdling screaming,” Rachel Mason, one of the neighbours, told CNN. “And then within about a minute, a shot rang out. We just ducked for cover, ran inside and called 911.

“We came back out and the guy was bleeding as the cops and the paramedics were coming, and our neighbour was compressing his chest.

“I didn’t know if he was alive or dead and he gets put on the stretcher and put in the ambulance.”

Ryan, a dog lover who’s walked pooches for the likes of Oprah Winfrey, was shot in the chest and is expected to make a full recovery, although he’s expected to recover. Miss Asia is being cared for by friends but is still shaken, sources say.

Gaga, who’s in Rome filming the new Ridley Scott movie about Patrizia Reggiani, who hired a hitman to kill her ex-husband Maurizio Gucci in 1995, has offered a $500 000 (R7,5 million) reward for the safe return on her animals, no questions asked.

Her father, New York restaurateur Joe Germanotta (63), says the family are traumatised. “It’s just really horrible – it’s like someone took one of your kids.”

He’s trying to keep his daughter calm, Joe told the New York Post newspaper. “Just try to be strong and remember that the dogs are together,” he told her. “They’re comforting each other.”

READ MORE| Happiness after the heartache: The Bachelor’s Marc has a new pup and her name is just adorable

Ryan, who used to work as a dogwalker in New York, moved to LA about four years ago to specifically walk Gaga’s dogs, according to ET Online. His own dog, a beagle called Remington, got on well with Gaga’s hounds.

“I mean, he’d do anything for them. It’s just heartbreaking and I know he must’ve been absolutely trying to protect them. He’d literally lay down his life for them.”

A post shared by Valley of the Dogs (@valleyofthedogs)

Fred believes the dogs were deliberately targeted for ransom and that Ryan’s regular walking schedule and routine were studied by the dognappers.

We live in a world where facts and fiction get blurred
In times of uncertainty you need journalism you can trust. For 14 free days, you can have access to a world of in-depth analyses, investigative journalism, top opinions and a range of features. Journalism strengthens democracy. Invest in the future today. Thereafter you will be billed R75 per month. You can cancel anytime and if you cancel within 14 days you won't be billed.
Subscribe to News24
Related Links
Meet Kevin! Kylie Jenner introduces fans to her latest adorable fur baby
Meet Ducky – the stylish pooch with the fabulous hair!
Kate, William and the kids mourn the passing of their beloved family dog, Lupo
Next on You
Rom-com queen Julia Roberts reveals the reason for her four-year absence from our screens