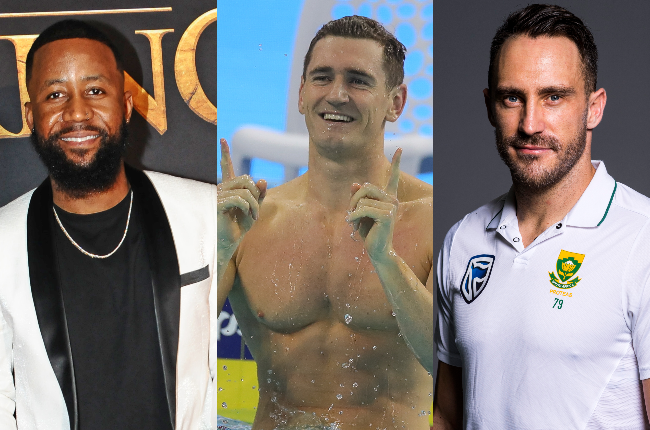 They’re sportsmen, musicians, models, all-round cool guys – and cool dads too! These are some of our fave celeb dads who’ve welcomed bundles of joy this year.

The Olympic swimming champ and his wife, marketing account manager Nefeli Valakelis (both 32), welcomed their first child, Harry, on 4 September. Naturally, Cameron can’t wait to get his son in the pool for a few laps, complimenting the tiny tot for “working on his streamline already”.

Our little Harry working on his streamline already ?? can’t wait to get him into the pool with dad for a few laps one day ??

The rapper has made no secret of his excitement at becoming a dad, teasing the news on social media ahead of the release of his album, Any Minute Now.

And no one was more thrilled when his partner, influencer Thobeka Majozi (27), gave birth to their son, Khotso, earlier this month. As Cassper (29) put it, “Let’s f**king go!!!! The baddest parents in the game right now!!! Khotso’s parents!!!! Khotso Izwe Simba Phoolo!!! Welcome to this world!!!”

Earlier this month the 26-year-old presenter and model revealed that he and actress Simphiwe Ngema (31) had welcomed a baby boy, Tiyani, in June but saved the exciting news to coincide with the launch of his clothing brand named after his son.

In a sweet letter to his partner, he wrote, “Lord knows how long I prayed on this moment and to be answered in the most beautiful way possible. I thank the Lord up above that you blessed me with your presence and showed me who I could truly be and for that I’ll forever be grateful”.

The former Proteas captain and his wife, Imari (33), have a new addition to their family, a sister for their daughter Amélie (2), who they’ve named Zoey.

“Welcome, Zoey, to this wonderful world. We’ll love you unconditionally and I’ll protect with everything I have. Love you,” Faf (36) wrote on Instagram when announcing her birth in August.

The Miracle of a new life coming into this world makes me stop and just be in awe of creation and how perfectly and wonderfully we’re created. Welcome Zoey to this wonderfull world. We will love you unconditionally and I will protect with everything I have . Love you @imagesbyimari ??‍??‍??‍?? #girlsdad

The musician usually keeps his private life pretty private, but recently revealed that he and his new bae are expecting a child soon. Zwai (45) has two kids with his ex-wife, TV presenter Melanie Bala (47).

He’s didn’t share his partner’s name and would only say that he won’t be sharing anything more and that “I’m a happy man”.

We live in a world where facts and fiction get blurred
In times of uncertainty you need journalism you can trust. For 14 free days, you can have access to a world of in-depth analyses, investigative journalism, top opinions and a range of features. Journalism strengthens democracy. Invest in the future today. Thereafter you will be billed R75 per month. You can cancel anytime and if you cancel within 14 days you won't be billed.
Subscribe to News24
Related Links
Athlete Akani Simbine and Jo Prins' top 5 cutest couple moments
Trevor Noah “getting serious” with Friday Night Lights star Minka Kelly
Cassper Nyovest trends with #BongiNkosi – and the track has tweeps feeling grateful
Next on You
Former Springbok Breyton Paulse opens up about his grief after his beloved mom and aunt drowned while on holiday