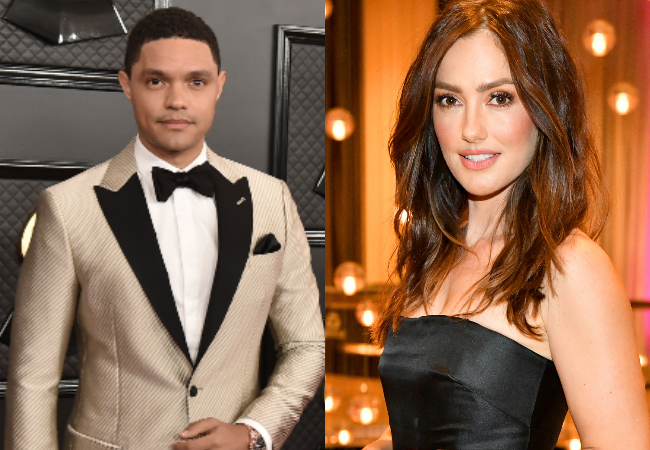 One side effect of life in lockdown is that it's a lot easier for celebs who prefer to live their lives outside the spotlight.

According to various media outlets, the pair are actually a couple and have been for "several months", according to E! News.

The Soweto-born comedian has been filming and producing The Daily Show from his Manhattan apartment for approximately six months.

But according to insiders, production on the show hasn't been the only thing going on at Noah's $10 million duplex penthouse.

Sources claim the 40-year-old actress has been living with him there for a while now, with People suggesting that "it's a very serious relationship."

The 36-year-old television personality was last romantically linked to Jordyn Taylor, who he’d been dating since 2015.

Early last year Jordyn, who is a model and real estate agent, confirmed that they had split up in mid-2018.

The Californian-born beauty spilled the beans after one of her followers asked if she loved him during a Q&A session on Instagram.

"Of course, I love him. How could you not love him? I love him so much, but you guys should know we broke up, like last summer. But yeah, I love him," Jordyn (29) said while chatting with fans in January 2019.

The former couple kept their relationship private, but Minka did break her silence to publicly hit back at rumours they had cheated on Jesse’s then wife, Aryn Drake-Lee. They eventually called it off in January 2018, after dating for several months.

We live in a world where facts and fiction get blurred
In times of uncertainty you need journalism you can trust. For 14 free days, you can have access to a world of in-depth analyses, investigative journalism, top opinions and a range of features. Journalism strengthens democracy. Invest in the future today. Thereafter you will be billed R75 per month. You can cancel anytime and if you cancel within 14 days you won't be billed.
Subscribe to News24
Related Links
R Kelly survives jail attack
No-one is perfect: local celebs get candid about their insecurities
Madness and mayhem: inside the bizarre world of the Tiger King
Next on You
BOOK EXTRACT | Sara-Jayne Makwala King on why she checks into The Clinic every year rather than going on holiday