At age 100 he's 'the happiest man on earth'. Here's what you can learn from him Eddie Jaku has inspired millions with his TED talk about living life on his own terms. Photo credit: Gallo Images/Getty Images

Eddie Jaku spent seven years facing unimaginable horror in German concentration camps - he lost friends and family and was treated like dirt. When he finally walked free he was so grateful to be alive that he made himself a promise: he swore that he would live every day with a smile on his face. Now at age 100 he is sharing his wisdom in an inspirational memoir, The Happiest Man on Earth, and a TED talk that has been watched by thousands.

Life can be beautiful if you make it beautiful, he insists. It is up to you. "What I have to share is not my pain. What I share is my hope," he writes in this extract from his new book.

For a long time, I didn't want to burden my children with my story. The first time they ever knew what happened to me was when they heard my story without my knowledge. When my son Michael was already grown, he heard I was to speak at the Great Synagogue about my experiences in the Holocaust, things I had never spoken to him about.

He arrived before me and hid behind the heavy curtains so that I would not know he was in attendance. Afterwards, he emerged from behind the curtains in tears to embrace me. This was the first time he ever knew. Since then, my children have been in audiences I have spoken to, but I have never been able to speak to them face-to-face about it.

When I try to talk to my son, I see my father in his face. It is just too hard. Sometimes I think that those of us who didn’t tell our stories for so long made a mistake. It seems that sometimes we missed out on a generation who could have helped to make this world a better place, who could have prevented the hatred that is now on the rise everywhere in the world. Perhaps we didn’t talk about it enough.

There are now deniers of the Holocaust, people who don’t believe that it ever happened. Can you imagine? Where do they think six million of us went? Where do they think I got this tattoo? I feel it is my duty today to tell my story. I know if my mother were here, she would say, ‘Do it for me. Try to make this world a better place.’

Over the years, I have seen my message start to spread. It is wonderful. I have spoken to thousands and thousands of schoolchildren, to politicians and professionals. My story is for everyone. And for the past 20 years, I have travelled annually to the Australian Defence Force Academy to speak to the young soldiers. These are the ones I want to reach – the officers, yes, but especially the young men who will be in combat one day. My message is most important to anyone who may hold a gun. Each time I speak at a school, I say, ‘Please put up your hands, anyone who said, “Mum, I love you,” when you left the house this morning.’

One evening, I returned home and my wife said, ‘Eddie, a Mrs Leigh rang. She wants you to call her.’

I rang her back and said, ‘Mrs Leigh, you wanted to speak to me?’

‘Yes, Mr Jaku. What have you done to my daughter?!’

‘On the contrary! You made a miracle. She came home and she put her arms around me and whispered in my ear, “Mum, I love you.” She’s 17 years old! Normally, all she does is argue with me.’

I try to teach this to every young person I meet. Your mother does everything for you. Let her know you appreciate her, let her know that you love her. Why argue with the people you love? Go out on the street, stop a person littering and argue with them. There are a million better people to argue with than your mum!

I will keep telling my story for as long as I can. The Jewish Museum will have to kick me out before I retire!

Every week, I would wake, kiss my wife, put on my suit, and go to the Jewish Museum to tell my story. At first it was the Jewish children who would come to listen. Then the children from other schools across Sydney. Then Australia. And then the adults – the teachers, their friends, their loved ones – began to come to hear what I had to say. This was very touching to me.

I began to travel, near and far, as schools and community groups, companies, all sorts of people, young and old, began to contact me, asking me to share the lessons of the Holocaust. One day, I received a letter from the Government of Australia. They told me that I had been nominated by a prominent doctor for an Order of Australia medal, and a panel was considering the honour.

On 2 May 2013, I travelled with Flore [his wife] and my family to Government House in Sydney, where at a ceremony presided over by the Governor of New South Wales, Marie Bashir, I was awarded the Order of Australia Medal for services to the Jewish Community. What an honour! What a wonderful thing.

Once, I was a stateless refugee, knowing nothing but sorrow. Now I am Eddie Jaku, OAM! Then, in 2019, I was approached by TEDx, an organisation that facilitates talks and speeches from all kinds of people, all over the world, united by the common ideal of ‘ideas worth spreading’. They wanted to help me to spread my message to the widest possible audience, over 5 000 people in a hall, and hundreds of thousands more who would watch online.

On 24 May 2019, I took to the podium for perhaps the biggest speech of my life. I had never spoken to thousands and thousands of people at a time before! After I finished, the whole audience leapt to their feet and would not stop applauding. Afterwards, there were hundreds of people lining up in the hall just to shake my hand or hug me.

In the time since that talk has been put online, more than a quarter of a million people have watched it. The technology is amazing. When I was a child, we were still sending messages by telegram and carrier pigeon! And now I receive mail from people all over the world who have heard my story and been inspired to reach out and tell me how it has moved them.

The other day, I received a handwritten letter from a woman in America, a total stranger, who wrote, ‘In seventeen minutes you have given me so much to think about, it has changed my whole life.’ Can you imagine? Not that long ago I was reluctant to share my pain with anyone. But this was before I realised that what I have to share is not my pain. What I share is my hope. 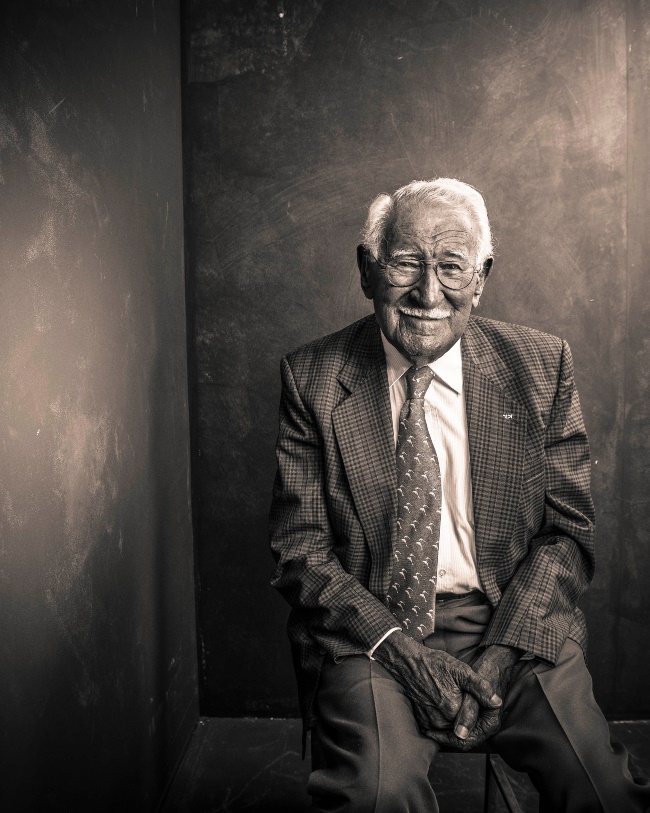 In 1950 he moved to Australia, where he still lives today. Photo credit: Tim Bauer

In 2020, I was a nominee for 2020 NSW Senior Australian Citizen of the Year. I did not win, but I was in the final four, which is not too bad for a centenarian! I will keep telling my story for as long as I can. The Jewish Museum will have to kick me out before I retire! When I get tired, I think of all those who did not survive to tell their story. And all those who are too badly hurt after all this time to tell their story. It is for them I speak. And for my parents.

It is time for the new generation, the young people, the ones with burning desire to make the world better. They will hear of our pain and inherit our hope. A field is empty, but if you put in the effort to grow something then you will have a garden. And that’s life. Give something, something will come back. Give nothing, nothing will come back. To grow a flower is a miracle: it means you can grow more. Remember that a flower is not just a flower, it is the start of a whole garden.

So I go on telling my story to anyone who wants to know about the Holocaust. If I get through to even one person, it is worth it. And I hope that is you, my new friend. I hope this story goes with you.