Jane Vorster | Zen and the Art of Household Maintenance I really don't know what possessed me. I blame that viral tweet that was doing the rounds at the beginning of lockdown. It went something like this: "If you don’t come out of this lockdown with: a new skill, more knowledge, better health and fitness, you never lacked time. You lacked discipline."

Instead of laughing it off for what it was – the pompous ranting of a self-satisfied fool – I took it to heart. Something about those words just resonated.

Lack of time has always been my go-to excuse for why my attempts at everything from yoga, running and meditation to kombucha-making have all fallen by the wayside.

But when lockdown rolled round, time was suddenly something I had plenty of and so I decided to revisit the ghosts of failures past. After all, why think of new ways to torment yourself when you already have all the equipment from old endeavours lying around the house gathering dust?

And so on went my running shoes and I was raring to go. By the end of lockdown I'd be ready to run a marathon, I told myself, but baby steps – let's start with 30 minutes a day.

Sadly, it only took one session for me to realise why the treadmill had spent two years folded up. I hate running. Really, truly, deeply – with an all-consuming passion.

Deciding it might be better if I started with something a bit gentler, I signed up for a very expensive online yoga course. This time, I roped in my two kids. Surely with the family involved it would be easier to commit?

No way. After two sessions I was done. My yoga mat is so old it left black stains on my hands and having my eight-year-old daughter farting in my face while she was doing downward dog kind of killed it for me. How could I be so flaky? What kind of example was I setting? It was time to find something and stick to it.

But on and on it went: transcendental meditation, crystal bowl breathing, writing three pages of early morning pages as part of the Julia Cameron’s Artist's Way (a programme I’ve been failing to stick to since the early 2000s) – I returned to them all and, just as before, after a few days I’d fallen off the wagon again.

Oh what was the point? Glancing over to the couch I could see my partner lying under a blanket looking, I couldn’t help noticing, much happier than me having completed another marathon binge-watching session.

Why was I torturing myself? Maybe it was better to give in, accept my limitations and just let it go. Perhaps in these uncertain times, it’s wiser not to put too much pressure on yourself and have so many expectations.

It was a neat rationale, but although it was nice to be able to sleep in a bit later without being plagued with guilt I couldn’t get over the feeling that I’d taken the easy way out. I realised the reason I’d been revisiting all these activities was because I really felt a driving need to find some healthy pursuit that will take me out of myself, especially now – and somehow, giving up the search felt even worse than the weeks I’d spent failing.

Deep down I knew I’d let myself down.

They say help arrives when you most need it. Mine was delivered to my door in a box – a late-night online shopping order I’d made to cheer myself up in the face of all my shortcomings.

When I unboxed it and assembled it there it stood in all its glory: an electric broom. You just charge it and then off you go, walking around the house with it as it glides along on a cushion of air, gobbling up all the fluff and gunk on your floors.

Unlike a vacuum cleaner, there are no cords and no screeching noise, just a reassuring purr as it makes the dirt disappear.

From the moment I switched it on I was hooked – to the point where I actually felt disappointed when I ran out of dirt to sweep. Seven days on, while sweeping I had an epiphany: I realised that after years of trying multiple forms meditation and yoga, this electric broom is the closest to mindfulness I’ve ever come. 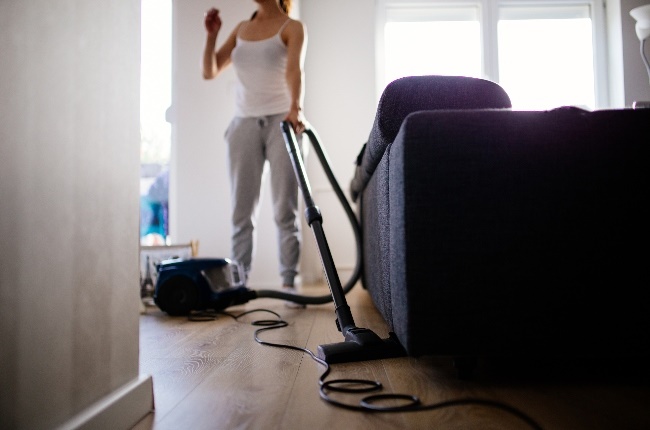 There’s just something totally absorbing about watching it work it’s magic. I know this is going to sound weird, but it doesn’t just feel as if it’s sweeping up the dirt, it somehow also seems to zap my negative thoughts.

“Really not coping with this home-schooling thing. What if M needs to spend another year in grade 2 because we’ve done such a lousy job . . .” SWOOSH . . .

Where has this miraculous device been all my life? Just imagine how much easier things would have been if I’d had it in my 20s. Or during my kids’ toddler years. Or the whole of the Zuma years.

But better late than never. At long last I’ve found a daily ritual I can commit to – and when I’ve finished my 20 minutes of sweeping I don’t only feel Zen, I also have exceptionally clean floors . . .

We live in a world where facts and fiction get blurred
In times of uncertainty you need journalism you can trust. For 14 free days, you can have access to a world of in-depth analyses, investigative journalism, top opinions and a range of features. Journalism strengthens democracy. Invest in the future today. Thereafter you will be billed R75 per month. You can cancel anytime and if you cancel within 14 days you won't be billed.
Subscribe to News24
Next on You
OPINION | Oh Harry, what have you done? Prince’s absence is glaring as royals gather for Prince Philip’s memorial

Read more on:
coronaviruscolumnslockdown
LATEST YOU