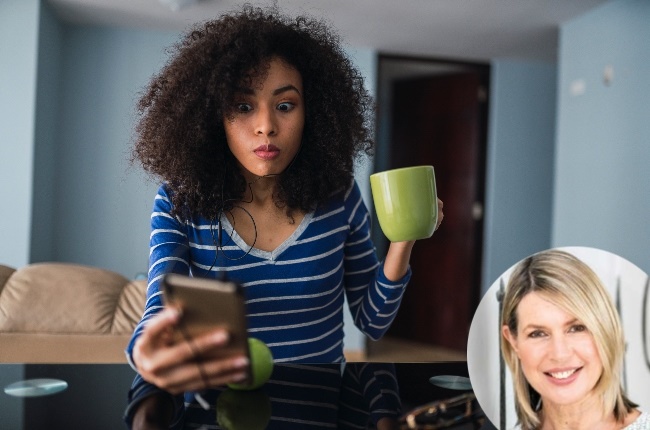 Linguistic experts say young people – Generation Zedders, so those in their early 20s and teens – have got a thing about full stops at the end of text messages. (Photo: Gallo Images/Getty Images)

Linguistic experts say young people – Generation Zedders, so those in their early 20s and teens – have got a thing about full stops at the end of text messages. They don’t like them. They feel like they’re a mark of irritation and impatience, like you’re cross with them.

So for instance, if you say, “I will be home shortly after five – please make sure you’ve fed the dog.”, this will be construed as, ‘my mom is mad at me, she thinks I never feed the dog, even though I do. It’s not fair, everyone hates me. No one understands me.’

But if you say, ‘I will be home shortly after five – please make sure you’ve fed the dog!” they will think you’re being friendly and like, nice. So they’ll feed the dog instead of taking to their beds in a heap of snowflakes.

To use or not use a full stop – that is the question. It’s been unpacked by academics before and was recently the subject of a study at Binghamtom University in New York. Basically, it boils down to this: it’s sometimes okay to end an email with a full stop because mails are generally perceived to be more serious and professional and workplace-y. But text messages are more casual and informal so full stops are not only unnecessary, the young argue, but rude and hurtful.

The debate was reignited recently by British journalist Rhiannon Cosslett when she sent out this tweet: “Older people – do you realise that ending a sentence with a full stop comes across as sort of abrupt and unfriendly to younger people? Genuinely curious.”

Cue a barrage of responses from the tweeps, including one who believes the whole issue is an example of “peak snowflakery”.

You know what it is, kids? It’s the only weapon we have. You have so many weapons and you aren’t afraid to use them against. All we have are full stops. And. We. Are. Going. To. Use. Them.

You are one step ahead in so many ways. Take TV remote controls. It was okay for us when there was just one of them – this button for on and off, this one to change channels, this one for volume, and so on. Easy. But then came more stuff, like Netflix and Showmax on a thing of wonder and bafflement called the smart TV, and remote controllery became a whole new ballgame.

I’m not saying we don’t know how to use the damn things – of course we do! It’s not rocket science! It’s just that it sometimes takes a little time to get to the place we want to be, and sometimes we pick up the wrong remote and jab buttons that do nothing. Cue the exasperation and impatience of young people who basically grew up with a remote in their hands. Yet do we take to our bed in a swoon? No. We just feel dumb.

Take meetings with millennials and Gen Zedders. It’s like being in room where everyone speaks a foreign language – acronymish. You try your best to keep up, surreptitiously googling each term under your desk. Tragically, though, by the time you’ve figured out what they’re talking about they’ve moved onto the next thing and all you get for your trouble is a side eye and smirk. Yet do we fall apart? No. We just feel dumberer.

It’s a minefield out there. I made the mistake the other day of saying “shook up” instead of just “shook” when I felt rattled about something. Oh, the disdain. Still, did I flounce off in a huff of hurt? No. I just felt dumbererer.

So forgive us for wanting to hold onto the full stop. So much power in one teeny tiny touch of a keyboard. It’s the superhero of punctuation, capable of all sorts of destruction.

And clearly a bit of a bully too. I think I like it. Period.

We live in a world where facts and fiction get blurred
In times of uncertainty you need journalism you can trust. For 14 free days, you can have access to a world of in-depth analyses, investigative journalism, top opinions and a range of features. Journalism strengthens democracy. Invest in the future today. Thereafter you will be billed R75 per month. You can cancel anytime and if you cancel within 14 days you won't be billed.
Subscribe to News24
Related Links
Nicola Whitfield | Damn you, lockdown brain!
Nicola Whitfield | Yes, I have it lucky – but my heart still hurts
Nicola Whitfield | The do’s and don’ts of my video lockdown life
Next on You
OPINION | Oh Harry, what have you done? Prince’s absence is glaring as royals gather for Prince Philip’s memorial