He never thought he'd see the day that he'd be able to hug his children or grandchildren or even take his dogs for a walk.

But 16 months after making history as the first person in the world to undergo a double arm and shoulder transplant, Felix Grétarsson has been able to do just that.

Specialists believed it would be a long road for the former electrician, unsure how much mobility he’ll have in his arms. The nerves still need to grow into the limbs, advised Dr Aram Gazarian, lead surgeon in the ground-breaking operation, which took place in Lyon, France.

However after the surgery on 12 January 2021, that lasted 14 hours and took a team of 50 medics to perform, Felix dedicated time to physiotherapy and intense rehabilitation, and his recovery has been miraculous.

"I finally got the hands I’ve been waiting for," the father-of-two, who can now drive with his hands and brush his teeth, shared with his supporters. The Icelander is delighted to be able to cuddle his grandchildren with his new arms. (PHOTO: Instagram/@felix_gretarsson)

Felix's life altered in one catastrophic moment on a freezing mid-winter day on 12 January 1998. He was doing maintenance work on an overhead power line just outside the Icelandic capital of Reykjavik when he was electrocuted by an 11 000-volt surge. Both his arms caught alight and he fell 10m from atop the utility pole to the ground below. He was placed in a three-month coma as doctors battled to save his upper limbs – and his life.

Felix also broke his spine in three places, fractured his neck and ribs and suffered such serious internal injury he needed a liver transplant. After dozens of surgeries to his shattered arms, chronic infection set in and both his upper limbs had to be amputated.

When Felix emerged from his coma, all he had were stubs near his shoulder bones. But that wasn’t the only blow: soon afterwards his fiancée, Sonja Eggertsdóttir, left him, taking their daughters, Rebekka Rut and Dilja, with her. Felix fell into a deep depression and resorted to drinking and drugs as a means of deadening the pain. “If I wasn’t the hard-working electrician with steady work, a fiancée and two little daughters, then who was I?” he recalls.

His substance abuse became so chronic he needed another liver transplant – and that was his “day of awakening”, he says. “I needed to find a way to go from surviving to thriving,” he says. “I had to stop being swallowed by self-pity.” His fiancée left him following the accident, but Felix found love again with Sylwia, who says she never felt the operation was necessary as her husband “wasn’t missing anything”. (PHOTO: FACEBOOK/FELIX GRETARSSON)

In 2007 Felix found a man who’d set him on a brand-new course to change his life. He’d heard that Professor Jean-Michel Dubernard, head physician of Édouard Herriot hospital in Lyon, was in Reykjavik and arranged to meet him at a hotel.

Dubernard is famous as a pioneer of transplant surgery and has performed many complicated operations, including a hand transplant and a partial face transplant. Although close to retirement, Dubernard (now 79) was touched by Felix’s determination and agreed to investigate the possibility of a double arm and shoulder transplant.

Transplant surgery continued to develop. In 2008, a German woman became the world’s first successful single arm-transplant patient and the news from Dubernard and his team was hopeful, although they needed to do more research. Felix then embarked on a huge crowdfunding drive to raise money for his surgery and became something of a celebrity in Iceland and Lyon.

Award-winning documentaries from Ireland captured his story, with filmmakers calling the doccie “a remarkable tale of the man who aims to change his life and make medical history”.

By 2011, Dubernard and his team of surgeons, scientists and legal experts had completed their research. A double arm and shoulder transplant was unprecedented and risky and there were no guarantees it would work, but they were prepared to go ahead. All they needed was a donor. 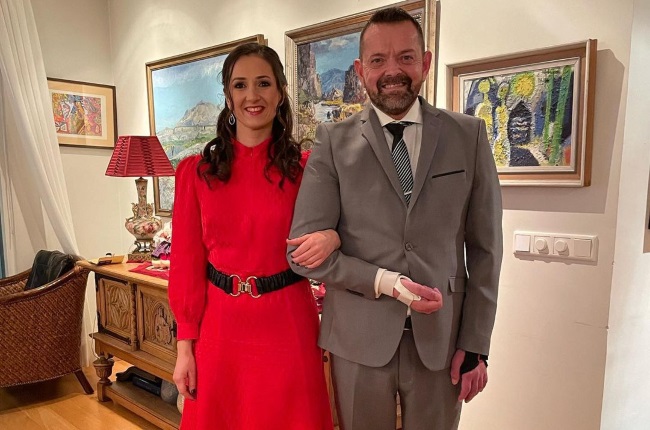 Felix met Sylwia in Lyon, while waiting for an organ donation. (PHOTO: Instagram/@felix_gretarsson)

Felix moved to Lyon in the summer of 2013 after receiving news of a possible donor, but it would be nearly eight years before the right one came along. He compared it to looking for a needle in a haystack – the braindead donor needed to be of similar age and the same sex, blood type and ethnicity.

In 2017 a Frenchwoman received a transplant of both arms below the elbows, firing Felix up. If she could find her donor, so could he – and finally the seemingly impossible happened. In January 2021 the perfect match was found, and the marathon operation could take place. “With this level of amputation, we can’t promise anything,” said Professor Lionel Badet, one of the surgeons on Felix’s case. “But we’ll support him all his life.”

Felix got his life back on track after beating his addiction demons. He’s a successful motivational speaker and life coach and has been married to Sylwia, a Polish yoga instructor, since 2016. For years he depended on one prosthetic arm and a metal hook, but Sylwia loves him for who he is, she says – a man with a big heart and plenty of determination.

“This surgery was his biggest dream,” she says. Felix admits that when he first woke up after the operation, he wondered what he’d done. “I thought, ‘What kind of idiot does this on purpose?’ It was as if I had two trucks parked on top of my shoulders!” he joked with reporters. Felix believes he is one of the luckiest people in the world to have undergone to surgery which gave him two new limbs. (PHOTO: Instagram / @felix_gretarsson)

“Now I enter three years of rehabilitation. My nerves need to grow out into the arms. It’s not certain if I’ll be able to use them fully.” But early reports are that the circulation to his new upper limbs is looking good.

As for Felix’s spirits, they’re high if his recent Facebook posts are anything to go by. He’s shared a picture of him dancing with nurses on his ward and even jokes about building biceps when the time is right.

We live in a world where facts and fiction get blurred
In times of uncertainty you need journalism you can trust. For 14 free days, you can have access to a world of in-depth analyses, investigative journalism, top opinions and a range of features. Journalism strengthens democracy. Invest in the future today. Thereafter you will be billed R75 per month. You can cancel anytime and if you cancel within 14 days you won't be billed.
Subscribe to News24
Related Links
SA’s new surgical hero: Meet the professor who has made history with the world’s first penis...
My story | I went in for minor surgery and ended up in a coma for three months
FROM THE ARCHIVE | Limpopo woman born without a nose is given a second shot at life thanks to...
Next on You
Meet Khaby Lame and Elsa Majimbo , Africa’s TikTokers taking the world by storm