Coming to Joburg: an eco-friendly mural that guzzles pollution 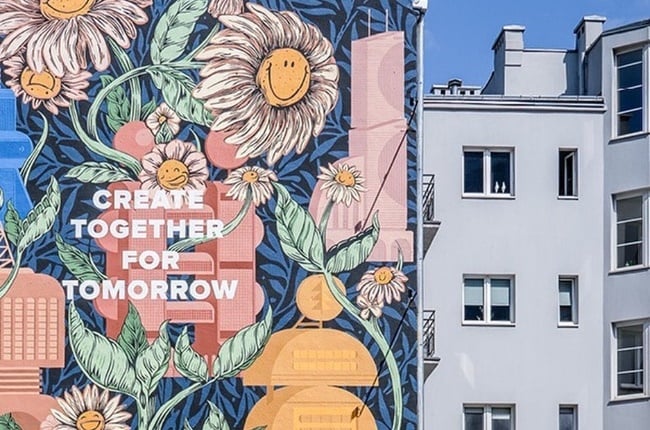 This eye-catching mural has had the same effect as planting 720 trees. (Photo: Instagram/@converse.polska)

This eye-catching mural has had the same effect as planting 720 trees. Versions of it will be going up around the world, including in South Africa.

You’d be forgiven for assuming a mural recently painted next to Warsaw’s bustling Politechnika metro station was done to add a pop of colour to the otherwise drab urban district.

The colourful fresco, produced by Polish artists Dawid Ryski and Maciek Pola, features the words “Create Together for Tomorrow” with several smiling flowers entwined around a series of high-rise towers.

Aesthetically pleasing as it may be, the mural serves the functional purpose of purifying the air around the Polish capital.

It’s created from special photocatalytic paints, which have the ability to turn pollutants and harmful compounds into harmless nitrates and carbonates. As such, the Warsaw mural has had the same effect as planting 720 trees or about 16 soccer fields.

Done in collaboration Converse, the smog-eating mural is one of 13 planned projects the American shoe retailer has dubbed Converse City Forests.

“This technology uses light energy to break down noxious air pollutants and convert them into harmless substances,” Converse explains on its website.  “Any surface coated with this paint becomes an active air-purifying surface that helps protect people from harmful gases.”

The mural depicts hands reaching out to each other and is purported to have the environmental impact of planting 150 trees.

“I used the image of holding hands as a symbol for unity. The most important thing was to communicate the unity of Thai people,” TRK says.

The other cities in which the murals will be installed are our very own Johannesburg, Sydney and Melbourne in Australia; Jakarta, Indonesia; Manila and Santiago in the Philippines; Sao Paulo, Brazil; Lima, Peru; Belgrade, Serbia; Bogota, Columbia and Panama City, Panama.

Once all projects are completed the 13 murals would be the equivalent of Converse planting 3 000 trees.

Read more on:
polandsmogwarsawpollution
LATEST YOU