‘I lied about being black’ says white African-American history professor Self-confessed race-faker Jessica Krug – the white academic pretended to be black for years – has resigned from the university she was lecturing at, and has been ditched by her publisher, who announced that all proceeds from Jessica’s book will go to a fund supporting black and Latino scholars.

She’s now also apologised for what she did. “For the better part of my adult life,” Jessica wrote in a blog post on Medium, “every move I’ve made, every relationship I’ve formed, has been rooted in the napalm toxic soil of lies.”

She taught classes about the African diaspora, African history, and Latin American history at George Washington University in Washington, DC, since 2012. For years, students, academics, and activists would hang on Jessica’s every word. She was a fierce advocate for black and Latino rights and a passionate lecturer in African-American history.

Readers of her book on the trans-Atlantic slave trade and slavery in America could not help be moved by her foreword, in which she paid tribute to nameless slave ancestors, and her unknown relatives, scattered across the US, Angola, and Brazil.

Her students looked up to her, and she was respected by fellow academics. She does not have any of the Afro-Latino heritage she’s been claiming her entire adult life, she is not the descendant of slaves, and she is, in fact, a white, Jewish woman from suburban Kansas.

Students and staff at George Washington University were horrified when Jessica (38) outed herself as white. 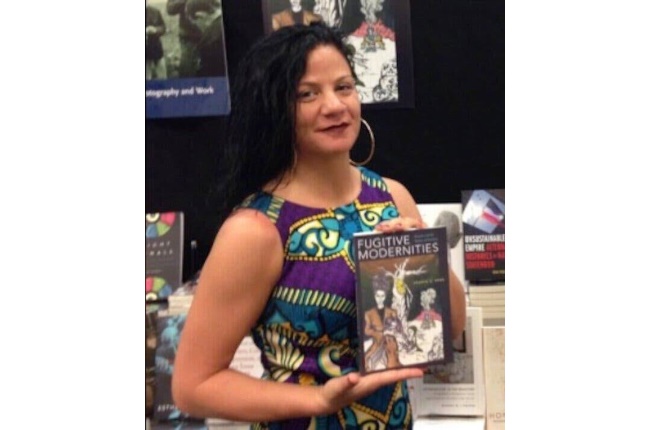 Her situation is eerily similar to that of Rachel Dozeal, another white American woman who, for years, pretended to be a black woman and championed African-American causes, until her parents outed her as a “race faker” in 2015.

Rachel, a former civil rights activist and African studies teacher, pretended for years to be African-American for years, and insisted that she “identified as black”.

Duke University Press publisher, Gisela Fosado slammed Jessica for having “deployed gross racial stereotypes to build her fake identity, and the way that she coupled her lies with a self-righteous policing of racial politics within the black and Latinx circles that she intruded upon”.

Shortly after her revelation and an investigation by the university, Jessica resigned.

“Dr Krug has resigned her position, effective immediately,” M Brian Blake, executive vice president for academic affairs, and Paul Wahlbeck, the dean of the Columbian College of Arts and Sciences, wrote in an email to the campus community.

In her Medium post, Jessica wrote that taking on a black Caribbean identity was “not only, in the starkest terms, wrong – unethical, immoral, anti-Black, colonial – but it means that every step I’ve taken has gaslighted those whom I love”.

Student Aria Sakona (21) was heartbroken at Jessica’s betrayal. “I was definitely very shocked. I was just completely perplexed since I just had a class with her on Monday,” Aria told the Washington Post. “She definitely kind of indicated a tie to the Latinx community. It just breaks my heart that these students came in, very bright-eyed and eager, to learn about Latin heritage and history. We all placed a lot of trust in her.”

The website Racebaitr, a platform for discussion about the expression of race, has removed all Jessica’s submissions from its website and social media.

“Her charade has taken her into many Black sacred spaces, including this one,” RaceBaitr said in a message on Twitter. “We apologize for platforming her work and not taking seriously enough some of your warnings.”

The site’s editor, Hari Ziyad, said Jessica was “someone I called a friend up until this morning when she gave me a call admitting to everything written in the Medium post. She didn’t do it out of benevolence,” he said. “She did it because she had been found out.”

Keeping Black spaces safe is our highest priority and we failed this time, but we will do better. Jessica Krug's words have been removed from our platform and we welcome any other suggestions for better vetting and elevating writers committed to the liberation of Black people. pic.twitter.com/jicCVCb24O

Another academic, Yomaira Figueroa, an associate professor of global diaspora studies at Michigan State University, said Jessica was well-respected as a historian, but some students had been asking questions about her background.

Yomaira, who said she does not personally know Jessica, tweeted that she’d told the truth “because she was caught… she knew the clock was ticking because folks started to confront her and ask questions”.

“Do not believe for on second that she would have come out with the truth on her own. She made a living & a whole life out of parroting Black Rican trauma and survival. As a Black Rican I am PI**ED. The other thing is that, let historians tell it, her work is actually good, chick is smart- so why lie? Why chase the extra clout of being a hood raised Black Boricua? Why put on that life that isn't yours & attempt to play it so well that you block, beat, and bully others? incl sh*t-talking Black women?

“Whiteness is a hell of a drug. But also she needs to account for everything she has taken, everything she has gained, all that she stole by creating this identity & shrouding herself with Black & Latinx folks who defended, supported, and lifted her up. What does restitution look like when she won awards, grants, & fellowships for underrepresented folks?”

In another weird twist, Krug also went by the name Jess La Bombalera and described herself as a dancer with the KR3TS Dance Company, which teaches children and young adults from low-income and Latino families in New York City.

The only reason Jessica Krug finally admitted to this lie is bec on Aug 26th one very brave very BLACK Latina junior scholar approached two senior Black Latina scholars & trusted them enough to do the research & back her up. Those two scholars made phone calls & reached out to...

In a video of a New York City Council hearing about police brutality held on Zoom in June, a woman who identified herself as Jess La Bombalera, “speaking from El Barrio, East Harlem,” with a Latina accent, spoke out about “gentrifiers and developers,” and “all these white New Yorkers who waited for hours with us to be able to speak, and then did not yield their time to Black and brown Indigenous New Yorkers”.

Jessica claims “mental health issues likely explain why I assumed a false identity initially, as a youth, and why I continued and developed it for so long”.

We live in a world where facts and fiction get blurred
In times of uncertainty you need journalism you can trust. For 14 free days, you can have access to a world of in-depth analyses, investigative journalism, top opinions and a range of features. Journalism strengthens democracy. Invest in the future today. Thereafter you will be billed R75 per month. You can cancel anytime and if you cancel within 14 days you won't be billed.
Subscribe to News24
Related Links
Up close and personal with Covid-19 advisor Professor Salim Abdool Karim
WATCH: Girl plays Cupid between her mum and professor on Zoom
Professor praised for babysitting student’s child in class
Next on You
Their baby girl was born at just 28 weeks – so this couple decided to marry in her neonatal ICU so she could be part of their big day