Lavender sales surge as lockdown affects sleep. Here’s how the wonder herb can help you If you found yourself battling insomnia throughout the lockdown – you’re not alone.

A British survey of nearly 16 000 people, aged 16 and above, found that the number suffering from sleep loss caused by worrying rose from one in six to one in four as a direct result of the huge disruption to people’s social and working lives amid the coronavirus pandemic.

“Sleep loss affected more people during the first four weeks of the Covid-19 related lockdown than it did before,” says Professor Jane Falkingham, from the Economic and Social Research Council-funded Centre for Population Change at Southampton University, which undertook the research.

“This reflects stress levels due to anxieties about health, financial consequences, changes in social life and the daily routine, all of which may affect sleep.”

It’s no surprise then that the sale of lavender – long linked to improving quality of sleep  – is surging as people seek relief from stress and sleep deprivation during the pandemic.

Castle Farm, the UK's largest lavender grower, reported that sales of its lavender sleep oils have quadrupled during the pandemic.

Lavender is recognised as a natural therapy to help people relax, unwind and sleep peacefully.

Research undertaken by University of Southampton in the UK tracked the sleep patterns of 10 adults. For a week, half the participants slept in a room where lavender essential oil was diffused in the air while the others were kept in a room where a placebo (sweet almond oil) was released. Then the groups switched rooms.

At the end of the study, volunteers ranked the quality of their sleep with 20% stating it was better in a lavender-scented room.

Meanwhile a team on psychologists at Wesleyan University in Connecticut had 31 men and women sniff lavender essential oil one night – and then distilled water the next.

Researchers monitored their sleep cycles with brain scans and found that lavender increased slow-wave sleep, instrumental for slowing heartbeat and relaxing muscles, and the group also reported feeling more energetic the next morning.

So, if you’ve tried other sleep remedies to no avail, place a few drops of lavender essential oil on your pillow before going to sleep tonight. Just be sure not to ingest it, as even small doses could prove toxic. 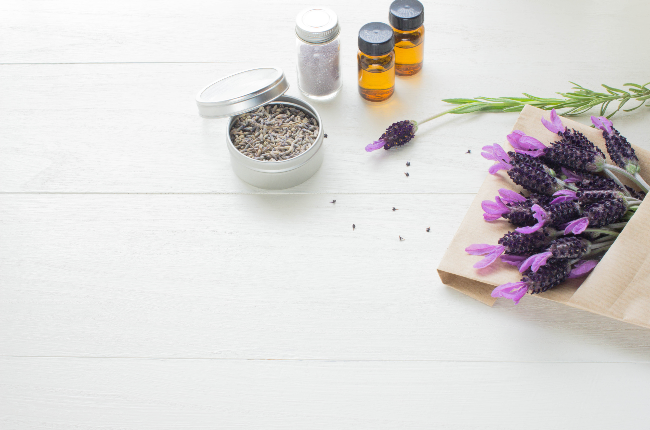 Lavender may be a great way to help you deal with premenstrual syndrome – that emotional rollercoaster which usually signifies that your period is on its way.

Lavender has also been proven as an effective treatment for alopecia areata, a condition in which hair is lost from some or all areas of the body.

Research from 1998 shows that lavender can promote hair growth by up to 44 percent after seven months of treatment.

In a more recent study, researchers found that applying lavender oil to the backs of mice helped to promote hair growth over the course of four weeks.

Researchers noted that wounds closed faster in the TENS and lavender oil groups than the control groups, suggesting that lavender has an acceleratory effect on wound healing.

A 2011 study published in the Journal of Medical Microbiology found that lavender oil could be effective in combating antifungal-resistant infections.

In the study, the essential oils distilled from the Lavandula genus of the lavender plant seemed to work by destroying the membranes of fungal cells and demonstrated antifungal activity on a wide spectrum.

A review article published in the International Journal of Psychiatry in Clinical Practice evaluated how effective Silexan (a lavender-oil preparation) might be for patients with different anxiety disorders.

The team found that Silexan had an anxiety-reducing effect on patients with generalized or subsyndromal anxiety within two weeks.

This is a common menopause symptom that affects many women and can make the face flushed and trigger perspiration.

According to 2016 study, lavender aromatherapy for 20 minutes twice a day may help reduce hot flushes and improve quality of life.

We live in a world where facts and fiction get blurred
In times of uncertainty you need journalism you can trust. For 14 free days, you can have access to a world of in-depth analyses, investigative journalism, top opinions and a range of features. Journalism strengthens democracy. Invest in the future today. Thereafter you will be billed R75 per month. You can cancel anytime and if you cancel within 14 days you won't be billed.
Subscribe to News24
Related Links
Too lazy to remove your makeup before bed? Try these shortcuts
Unable to sleep? Here are the best ways to trick yourself into dozing off
Insufficient sleep linked to expanding waistlines
Next on You
How surgeons used a groundbreaking virtual reality procedure to separate conjoined twins connected at the skull