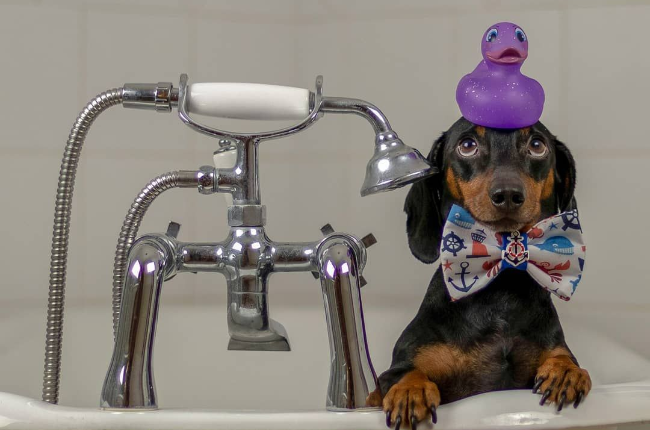 Harlso the dachshund can balance a variety of things on his head (Photo: Instagram/@harlso_the_balancing_hound)

Harlso the dachshund’s ability to balance things on his head has turned him into a social media star.

Sit! Stay! Fetch! Play dead! These are all standard tricks many pet owners love to teach their precious pooches. But for Harley – or Harlso as he’s affectionately known to his humans, Jennifer Scott and Paul Lavery – these commands are just so last year.

With his big eyes, stumpy legs and droopy ears, the delightful little dachshund from Belfast in Northern Ireland has become Insta-famous for his most unusual party trick: his jaw-dropping balancing act. Whether he’s working with a doughnut, an avocado or a cup of coffee, Harlso has the uncanny ability to hold an item perfectly in place on his adorable little head.

The last puppy of his litter, Harlso was taken in by Jennifer (29) and Paul (30) when he was four months old, and the couple stumbled across his talent by chance. “When Harlso was two I was playing fetch with him at home,” Paul recalls. “He loves chasing his ball across the living room – never tires of it. While we were playing I set his toy chicken on his head. He stood still and didn’t shake it off. He has the flattest head. I couldn’t believe it!” Paul Lavery, and his Webby Award for being an internet star. (Photo: Instagram/@harlso_the_balancing_hound) 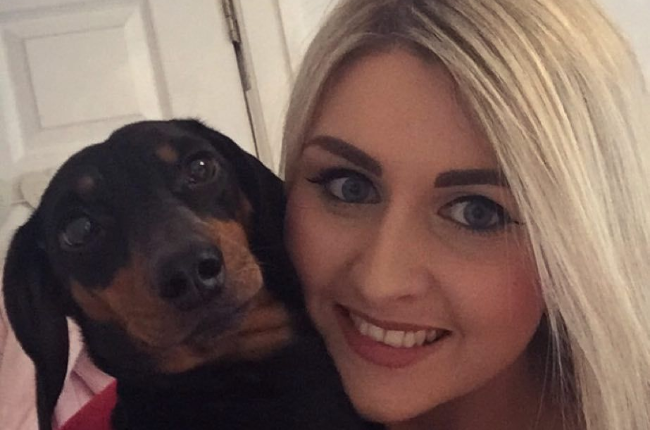 A few weeks later, he did it again – this time with a rose on Valentine’s Day. “We started experimenting with things and rewarding him with treats, and that’s how we realised he was a balancing genius,” Paul says. “Before that he hadn’t learnt any tricks. He couldn’t sit on command, give his paw or lie down.”

He’s now been dubbed Harlso the Balancing Hound and become a social media sensation. Jen and Paul decided to start a website and create social media accounts to show off his skill and since then the little guy has raked in thousands of views on YouTube. He has more than 7 000 followers on Twitter and more than 135 000 on Instagram.

In each post Harlso wears a bow tie or neckerchief that complements the item he’s balancing, such as a pizza slice, a succulent plant, a trophy and even a soccer ball. “We started the Instagram account as a bit of fun, never expecting it to become so popular. When Jen first set up the account I laughed at her and asked, ‘Who’s going to be interested in this?’”

He was always really bossy and a bit of a diva, so fame hasn’t changed him at all
Paul

Harlso also had a starring role in the biggest romantic moment of Jen and Paul’s life. “We were on holiday in New York and we were in Times Square when Paul pulled out his phone to show me a video of Harley balancing an engagement ring on his head,” Jennifer says.

“When I realised what it was, how could I say no?” With Harlso’s growing popularity, followers began to wonder if Paul was some sort of dog whisperer, and started asking him if he could give them tips and tricks on how to train their own dogs. But it’s all Harlso, he says.

“I really have no idea how he does this. He balances 99% of things first time.” The couple have also had to field questions and concerns about whether all the balancing is good for the cute canine’s head. Paul insists they’ve never used anything too heavy or items that would endanger their dog. The obliging pooch enjoys being praised and gets rewarded with treats and cuddles.

“We do this at most one to two times a week and never for longer than 15-20 seconds. Whenever we bring in something to balance, he jumps up on his chair, sits down and waits for it to go on his head to get a treat,” Paul says. “It’s the only trick he knows.” Harlso has even officially been recognised for his skill.

The Webby Awards, presented annually by the International Academy of Digital Arts and Sciences and which recognise excellence on the internet, awarded Harlso the 2019 People’s Voice Award in the social animal category. He was also named Northern Ireland’s social media personality of the year for 2019, beating many humans to the title. And he’s been listed as one of Guinness World Records’ Amazing Animals.

“He was always really bossy and a bit of a diva, so fame hasn’t changed him at all,” Paul says with a laugh. Now that’s something to bark home about. This bow tie- wearing pooch can balance an array of items on his head – from trophies to fruit and veg. (Photo: Instagram/@harlso_the_balancing_hound) The trick has gained Harley, or Harlso as he’s affectionately known, thousands of followers on Instagram and Twitter. FROM (Photo: Instagram/@harlso_the_balancing_hound) We live in a world where facts and fiction get blurred
In times of uncertainty you need journalism you can trust. For 14 free days, you can have access to a world of in-depth analyses, investigative journalism, top opinions and a range of features. Journalism strengthens democracy. Invest in the future today. Thereafter you will be billed R75 per month. You can cancel anytime and if you cancel within 14 days you won't be billed.
Subscribe to News24
Related Links
Owner is reunited with missing dog after ‘six cold days’ – and it’s the best thing you’ll see today!
Woman leaves her job to pretend to be a dog – and earns six figures a month!
Dog waits three days outside hospital for owner with coronavirus
Next on You
Picture the world: these incredible images from the Global Photo Awards reflect the light and dark sides of life

Read more on:
animalsdogs
LATEST YOU