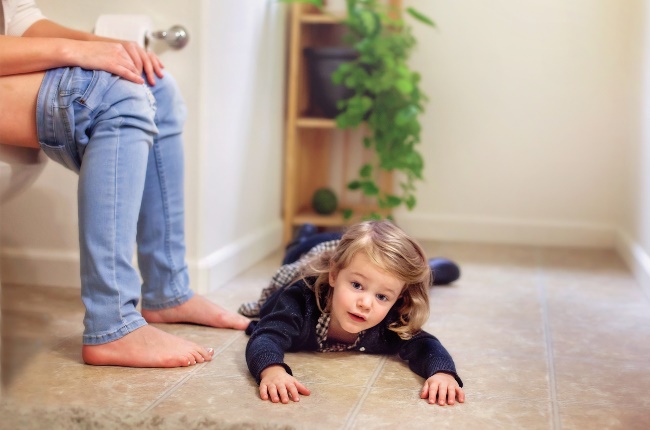 Mother on the loo with her child being a little cheeky. (PHOTO: GALLO IMAGES/GETTY IMAGES)
Sarah Wolfe Photography

It’s one of those things you just have to accept when you’re a parent: suddenly there’s no longer any privacy – as mom discovered when she took her two young sons to the bathroom with her during a shopping trip.

Sharing her experience on Momstrocity, a Facebook page dedicated to mom fails and experiences, Eliza Morrill explained how she lost “any shred of dignity” during a trip to the bathroom at a US supermarket with her four-year-old twins.

With nobody else to watch them, she was forced to go into the tiny cubicle with them. Then to make matters worse, as she settled onto the loo it dawned upon her that it was that time of the month - or as she comically puts it “Aunt Flo had entered the building.”

Despite her best efforts to distract her sons, they spotted something amiss and immediately started screaming “MAMA YOU HAVE BLEED ON YOU" and "BLEED IS COMING OUT OF YOUR BOOTY!”

To her horror, Eliza heard laughter coming from one of the other cubicles. She begged her little ones to be quiet but to no avail.

“Mom. Are you okay?!? This is so bad. This is so so bad. You need a Bandaid,” the one proclaimed.

Things got even worse when one of the boys stuck his head out of the door to call for help, telling complete strangers that his mom is “bleeding really bad out of her booty.”

“In this moment, I want to die,” Eliza later recalled. "I scoot them out of the stall to find a precious, older woman at the sink, tears of laughter streaming down her face.

"As you may have guessed, I did not make it home with laundry detergent and baby socks today. And also not my dignity."

The post was so relatable, that hundreds shared the hilarious anecdote.

“The kids read our reactions quite well and they are very intuitive, so if we freak out when we see the blood, they are going to freak out. If we keep calm and are very open about it, because it’s part of our lives, then their reaction would also be quite a disinterested one.”

“Young children will move on quite quickly from the conversation because it’s irrelevant to them,” she adds.

She says it’s best to stick to the simple facts.

“I would say that every woman goes through a time of the month when she has bleeding because she is not pregnant,” she Novikova suggests.

“I would say it as it is, and one would have to explain the cycle of the ovary which sounds medical but there are books which one can read to kids and it explains that there’s an egg and the sperm.

She highlights that the way parents react will have a direct effect on how their kids react.

“If we can normalise it for ourselves, then there won’t be any issues with shame or embarrassment or being scared or petrified from the kids’ side because they will just mimic our reactions.”

We live in a world where facts and fiction get blurred
In times of uncertainty you need journalism you can trust. For 14 free days, you can have access to a world of in-depth analyses, investigative journalism, top opinions and a range of features. Journalism strengthens democracy. Invest in the future today. Thereafter you will be billed R75 per month. You can cancel anytime and if you cancel within 14 days you won't be billed.
Subscribe to News24
Related Links
Five times Serena Williams and Alexis Olympia were the matching mother-daughter duo we needed
Woman’s shame as her dirty text she sent her husband is read by mother-in-law
Fergie shares her joy following daughter’s wedding
Next on You
Call me Mutant Man! This tattoo fanatic has more than 13 facial piercings and keeps leftover slices of his ear in a jar