She’s 80, he’s 35 – and the handsome Egyptian claims he’s smitten with the British grandmother! 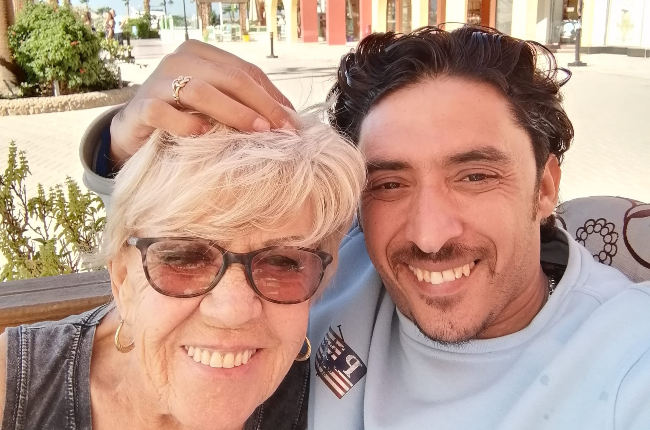 Iris Jones and Mohamed Ahmed Ibriham turn heads when they out in public due to the vast age difference - 45 years. (Photo credit: Facebook/Iris Jones)

The pair, who met last year on Facebook, recently tied the knot in Mohamed’s native Egypt.

“I do not want a nationality nor do I want money,” he said. “I am comfortable like this and I work, praise be to God, with my money.”

Iris, a former cleaner, says there’s no way he could be after her money as she lives on a weekly pension of £200 (about R4 000) and disability benefit.

“If he’s marrying me for my fortune he’ll be sadly disappointed,” she says.

“I don’t suffer fools gladly. I’m honest and I’m truthful and I told him straight away he couldn’t be a freeloader.

“In Egypt we are quite frivolous, going out to the best restaurants all the time and we split everything 50/50.

“He’s even said he’ll sign a prenup because it’s me he wants – not my house.”

Speaking to the UK’s Mail Online, Mohamed says he doesn’t care about the age gap. “When you are a man and you fall in love with a woman, it doesn’t matter how old she is or what she looks like.”

“It’s not her appearance that interests me but what’s inside. She has a great mind and loving heart.”

“It might seem a bit strange having a wife who’s 20 years older than your mother but that’s love.”

Mohamed is reluctant to talk about their sex life in detail as “we don’t talk about such things in Egypt”.

“But it is very passionate,” he admits.

Iris was far less coy when she appeared on ITV’s The Morning Show recently and left hosts Holly Willoughby and Phillip Schofield gawping with her rather graphic details.

The grandmother admitted they used “an entire tube of KY jelly” during their first night of passion. “Nobody has been near me for 35 years. I felt like a virgin again.”

“My ex-husband said I was frigid when we divorced 40 years ago but I now know I’m certainly not. I just want to be with the man I love before I die.

“I’ve always been a bit of a rebel and he’s just perfect for me.”