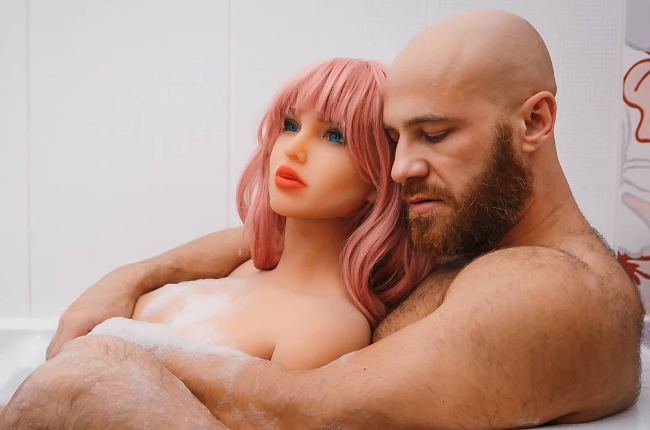 Yuri met Margo in a nightclub in 2018, and they hit it off instantly (Photo: Instagram)

Confirming that love is indeed blind, a Kazakh bodybuilder and his long-term sex doll – the Barbie to his Ken, if you will – have said their “I do’s” in front of friends and family.

Yuri Tolochko, a self-proclaimed “sexy maniac” and pansexual, planted a kiss on his radiant bride’s squishy lips, and the deal was sealed. “It’s happened. To be continued,” Yuri captioned a pic of their special day on Instagram.

They would have wed earlier, said Yuri, but the coronavirus forced them, like many other couples, to put their plans on hold.

Yuri met Margo in a nightclub in 2018, and they hit it off instantly, he says.

As a pansexual, Yuri explains that he does not let gender or sexuality define his sexual or romantic relationships – he can fall in love with, “a character, an image, a soul or just a person”.

He popped the question in December 2019, but along with the pandemic, their plans were also delayed when Yuri was assaulted while he was attending a transgender rally on Halloween.

“I went to a peaceful meeting in Almaty (in Kazakhstan) today. However, the rally was not peaceful. I was beaten,” he said in a video clip showing his bruised face and broken nose.

“They beat me up because I decided to support transgender people.”

Yuri, who describes himself as an art worker and “sexy maniac”, said he “likes the process of sex itself. And gender, sexual orientation are not particularly important here”, he said, referring to his new bride, who shares his home with their dog, Marco.

“Our story turns me on much more than sex itself.”

Surprisingly, he said that Margo is “capable of what other people are not capable of.”

Their love story is far from unique.

In China men have been buying similar dolls and treating them as companions, and in some cases, as their offspring, while transporting them around town, treating them to a movie and going for walks in parks.

In Florida, in the USA, Joey Morris (30) said he’d fallen in love with a pink-haired RoboTroll action figure he bought online. In Massachusetts, Felicity Kadlec (22) married Kelly, a zombie doll she’d owned since childhood; and in Taiwan, Chang Hsi-hsum (50) married a Barbie doll to appease the restless spirit of his dead wife.

In the movie Lars and the Real Girl, Ryan Gosling plays the extremely shy Lars who finds it just about impossible to socialise with others. When he tells his family he has a girlfriend he met online, they are thrilled, until Bianca turns out to be a sex doll. On the advice of a doctor, his family and the rest of the community go along with Lars’ delusion that she’s a real woman, until he accepts that, most of the time, real people are better company.

We live in a world where facts and fiction get blurred
In times of uncertainty you need journalism you can trust. For 14 free days, you can have access to a world of in-depth analyses, investigative journalism, top opinions and a range of features. Journalism strengthens democracy. Invest in the future today. Thereafter you will be billed R75 per month. You can cancel anytime and if you cancel within 14 days you won't be billed.
Subscribe to News24
Related Links
THE BIG READ: The future of sex and sex robots
Pretoria couple on being parents to three lifelike dolls: ‘They make us happy’
Instagram trend features Barbie dolls in soap-style stories
Next on You
He started going to gym in his 60s and at 94 he's still going strong