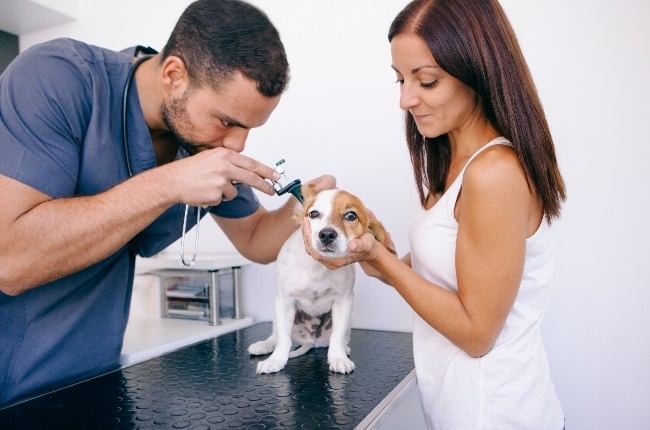 A woman spent thousands on her dog's fart treatment only to find out that her husband was the real culprit. (Photo: Gallo Images/Getty Images)

It started with a foul odour at the dinner table – and ended in exorbitant pet bills, a rocky marriage and a change of diet!

This is the cautionary tale a pregnant woman shared on discussion website Reddit.com about her husband and their dog, Jerry.

“A month ago, my husband and I were eating dinner when suddenly I smelled something really disgusting,” the unnamed woman wrote. “My husband instantly made a face so I knew it wasn’t just me.”

Being pregnant, the woman’s sense of smell was heightened and so the stench was overwhelmingly awful to her.

“It honestly smelled like rotten eggs,” she said. The smell went on for weeks and all the while her husband let the dog take the blame.

“He’s an absolute sweetheart,” she wrote about Jerry. “He has such a sweet and gentle disposition and he doesn’t have an unkind bone in his body. I love him dearly.”

She was concerned that the pooch appeared to have developed an alarming stomach problem.

The woman tried a diet change for the dog, but the farting continued. Multiple trips to the vet followed, but nothing seemed to work and still the stench continued to make its presence felt at the dinner table.

Then after five weeks of trying and failing to solve the problem, the truth was revealed. The husband confessed to his wife that he was in fact the one creating the stink.

So enraged was the duped wife that she kicked her smelly spouse out of the house for a spell. The woman tried a diet change for the dog, but the smelly farts continued (Photo: Gallo Images/Getty Images)

What irked her was that her husband had let her waste time and money on something that could’ve been resolved quickly, she said. “I’m not the type to hold a grudge but the issue here isn’t that I’m angry or that he lied. It’s that he was lying at the cost of someone who couldn’t advocate for themselves.”

And it’s not like she would’ve judged her husband if he’d told her the truth. “We have farted in front of each other,” she admitted.

“There’s no judgment here from my end. If he’d told me it was him, I’d have said, ‘Okay, cool, and if the issue had persisted, as it did, I’d have told him to go to the doctor.”

Once the husband was allowed back home, the wife told him he had to go to the GP and he was told to change his diet.

The wife also ordered her husband to pay half the vets bills out of his savings. He agreed but wasn’t happy about it.

As for Jerry, he’s basking in the sweet smell of victory.

We live in a world where facts and fiction get blurred
In times of uncertainty you need journalism you can trust. For 14 free days, you can have access to a world of in-depth analyses, investigative journalism, top opinions and a range of features. Journalism strengthens democracy. Invest in the future today. Thereafter you will be billed R75 per month. You can cancel anytime and if you cancel within 14 days you won't be billed.
Subscribe to News24
Related Links
Who’s a clever boy then? Dog walks 60km to be reunited with owners
How adorable dog book helps parents explain ADHD to their kids
Blind golden retriever’s budding relationship with his guide dog
Next on You
This 5-year-old can't stop eating thanks to a rare genetic disease