All aboard! Local man builds train to help kids get to school 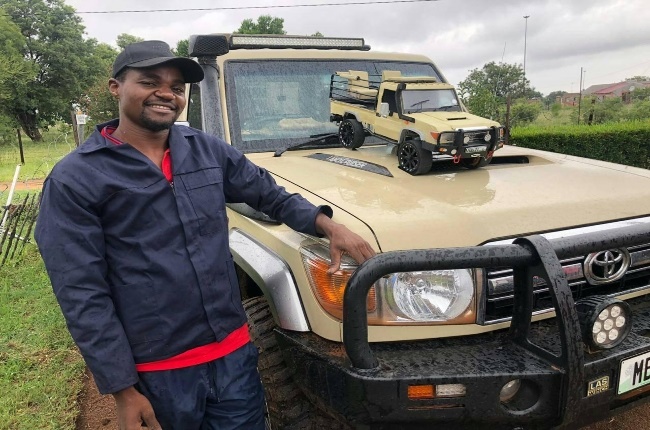 He decided he needed a project to keep him busy during lockdown – and so a local innovator set to work, building his own train on wheels. Now his creation, which was made entirely by hand, is being used to ferry kids to school in Pretoria.

With its bright-blue, red and yellow paintwork, the five-carriage train has become a distinctive feature in the streets of Suurman in Hammanskraal where it transports pre-schoolers to a nearby crèche.

The train is the handiwork of 32-year-old Hendrick Sithole, a self-taught engineer.

“A crèche owner asked me to create a train for him to transport pupils, so it kept me busy during the lockdown," he tells us. “I started it in March and it took me six months.”

With no formal training, Hendrick built the train from scratch, fitting a petrol engine he created from a generator.

Hendrick used steel and metal sheets to construct the train and covered the edges of the metal sheets with rubber to ensure the kids don’t sustain cuts.

It has five coaches and carries a maximum load of 75 people seated, with no allowance for standing passengers.

The carriages have four wheels each that resemble those on wheelbarrows, with refillable tyres.

He bought the material from scrapyards and a factory in town. He says he sold the train for R30 000 to the crèche owner.

Before this, Hendrick made waves with his almost life-sized police van and helicopter replicas, which he built and displayed on the busy Lucas Mangope Road that connects many Tshwane townships, including Soshanguve, Mabopane and Ga-Rankuwa.

“People would stop to have a look at them and take pictures, and others even made donations,” he tells us.

When he realised how popular his creations were, he decided to create a Facebook page which brought him to the attention of international customers.

He says he’s couriered a few miniature car replicas to the US as a result.

Hendrick has been building things for as long as he can remember.

He initially made toy cars for kids but in 2013 decided to go bigger.

“My first major project was a big police van that was a hit with children. Parents would want to take photos of their kids in it. But it also attracted the attention of a police officer from Limpopo who bought it as a reminder of his service,” Hendrick says.

Last year, he opened up a workshop in his yard where he works with his wife, Charity Chibare (23).

He makes orders from there and Charity mostly helps with the paintwork.

Their son, Terrance (2), is allowed to “test drive” his dad’s creations too.

“He just picks and chooses what he wants from the stock in the workshop,” Hendrick says.

The project he’s most proud of is the sports car he designed and made for himself, which he plans to secure rights to manufacture and sell.

“It’s a red car that I call Mandela,” he tells us.“It runs on petrol and its fastest speed is 160km/h. I just want to get it tested and approved so I can drive around in it.”

It cost him about R15 000 to manufacture – from the engine to body parts.

“I love designing cars and I realised that there aren’t really any car designers in South Africa,” Hendrick says.

And from the sounds of things, he will be happy to step in.

We live in a world where facts and fiction get blurred
In times of uncertainty you need journalism you can trust. For only R75 per month, you have access to a world of in-depth analyses, investigative journalism, top opinions and a range of features. Journalism strengthens democracy. Invest in the future today.
Subscribe to News24
Related Links
Cape Town man gives up his home for the greater good of the community
‘I’d do it all again’: heroic neighbour braves fire to save two-year-old
Next on You
Free State woman devastated after puffadder kills one of her dogs and bites another

Read more on:
lesego seokwangtshwanelockdownart workstrainart and culture
LATEST YOU